The five-judge Supreme Court bench unanimously ruled that Mr Yameen had failed to prove his claim that the election was rigged and a fresh poll was necessary in the Indian Ocean archipelago.

But he then filed an appeal this month, throwing the island nation into turmoil and attracting warnings from the United States and regional superpower India to respect the outcome.

Mr Yameen claimed magic ink had been used to rig the election and that votes marked for him disappeared inside ballot boxes.

Opposition activists celebrated outside the Supreme Court in the capital Male after the decision was read out, effectively drawing a line under Mr Yameen's five years of iron-fisted rule.

"After weeks of uncertainty, the Maldivian people can finally enjoy clarity regarding the outcome of the election," said President-elect Ibrahim Mohamed Solih, who swept September's poll in an unexpected landslide victory. 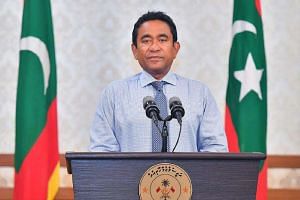 "The petition to annul the election was frivolous from the start, and spoke more about an inability in some quarters to accept defeat, than any genuine concerns about the vote."

Opposition legislator Mariya Didi said Mr Yameen - who lobbied the Supreme Court in 2013 to nullify election results in his favour - should now allow a smooth transition of power.

"We are pleased that the court ruled unanimously to uphold the will of the people," Mr Didi said on Twitter.

"The case was based on conjecture and conspiracy theories."

The country's independent Elections Commission, through its lawyers, had argued Mr Yameen's petition was based on false allegations and should be dismissed.

The Supreme Court bench last week refused to accept the testimony of three unnamed witnesses that Mr Yameen's lawyers said would prove the election was fixed.

The next day, Mr Yameen went on national television to concede defeat a second time, making no reference to his controversial legal bid.

"This is my final address to the nation before I leave," said the 59-year-old, whose term in office ends on Nov 17.

"During my tenure, the most difficult thing for me was my failure to learn about the people. I just couldn't find out what shapes their wishes."

Ahead of court hearings in the capital Male last week, the United States warned that "appropriate measures" would be taken if the will of the Maldivian people was undermined.

Europe and India have also issued similar warnings in the past.

The situation was similar to 2013, when Mr Yameen convinced the Supreme Court to nullify the first round of voting, which he was trailing to opposition candidate Mohamed Nasheed.

A subsequent vote was then twice delayed, allowing Mr Yameen time to forge alliances that helped him narrowly win a contested run-off.

He has ruled with an iron fist ever since, crushing dissent and jailing or exiling all his major opponents.

In February, Mr Yameen jailed the chief justice and another Supreme Court judge after accusing them of trying to topple him.

Mr Yameen had initially suspended the court, Parliament and the Constitution and declared a state of emergency when legislators were about to impeach him.

Since his election defeat, several high-profile political prisoners including his estranged half-brother Maumoon Abdul Gayoom, who ruled the Maldives for 30 years until 2008, have been released from jail.

The US and its allies have been concerned by growing Chinese influence in the strategically positioned Indian Ocean archipelago, especially under Mr Yameen's authoritarian rule.