In his commentary, the writer says that with the repeal of Article 370, the Bharatiya Janata Party will most likely up its ante in re-shaping the future of India, calling into question the traditional vision of India's unity in diversity.

DHAKA (THE DAILY STAR/ASIA NEWS NETWORK) - It was a dramatic momentous Monday for Jammu and Kashmir.

In one go, the Bharatiya Janata Party (BJP)-led Indian government put the militancy-hit state in a new template of its future journey along a path that is set to be very different from the one it has treaded for the last seven decades since the accession of the princely state to India after Partition in 1947.

On August 5, Home Minister Amit Shah introduced two bills and two resolutions regarding Jammu and Kashmir in the Rajya Sabha that repealed Article 370 of the Indian Constitution - which gave the state a special status - and bifurcated the state into two federally-administered territories, drastically reducing its powers to function with a greater degree of autonomy and putting it under the decisive control of the federal Indian government.

All the bills and resolutions were passed with emphatic majority by the Rajya Sabha where the BJP and its allies lack a favourable arithmetic, thanks to the government's deft management in bringing the lawmakers of some opposition parties and a group of key regional parties on board to back its most audacious move on Kashmir.

India has not witnessed such landmark legislative amendments with far-reaching ramifications for its polity within a day.

The abrogation of Article 370 came after much speculation about the massive security build-up in Jammu and Kashmir over the last one week and about the strategy of the government of Prime Minister Narendra Modi.

In his speech while announcing the revocation of Article 370, which has since long been one of the three pillars of the BJP's Hindutva ideology and vision of India, Amit Shah viewed Jammu and Kashmir's past and future through the prism of economic development or rather the absence of it.

An overwhelming portion of his speech was devoted to how Jammu and Kashmir has lagged behind in economic progress and how robust economic infrastructure can turn the state around by attracting private investment and increasing employment opportunities for the youth.

He pointed to Article 370 as the source of all problems in Jammu and Kashmir - economic backwardness, lack of democracy, corruption and terrorism. 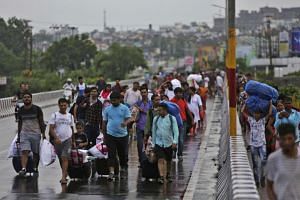 Jammu, Kashmir to be split into two parts

Post-repeal of the Article, he said, doors to private investment in the state would be opened, which would in turn increase the potential for development there.

Land would be opened up for purchase which would bring in investments from private individuals and multinational companies and give a boost to the local economy, he added.

Article 370 did not allow people from outside Jammu and Kashmir to do business there and led to the absence of economic competition, the home minister said, and he pointed out that "land prices are at rock bottom because no one can buy land there and no industry is allowed to flourish there."

Over the decades, the Indian government pumped hefty funds into the state but adequate educational and health services were missing.

Article 370 prevented skilled professionals from outside the state to settle down there and prevented some of the welfare schemes of the Indian government from reaching the people of Jammu and Kashmir.

There appears to be a short-term and a medium- to long-term strategy behind the Indian government's actions.

It is quite possible that Prime Minister Modi will come up with plans of mega investments and other measures for Jammu and Kashmir which would help generate jobs for locals as well as plans for land allotment for setting up industries and incentives for private sector investments.

The assumption is, economic prosperity would alleviate the sense of alienation among the people of Jammu and Kashmir and drive them away from the appeal of militancy.

Interestingly, the economic-development-and-good-governance narrative was flagged upfront in Indian Foreign Secretary Vijay K Gokhale's briefing of envoys of key countries, including the five permanent members of the UN Security Council, explaining the rationale behind the repeal of Article 370.

Thus, the Modi government deftly cloaked its Hindutva plank with the robe of a grand economic vision for Jammu and Kashmir.

So, the performance of the Modi government in delivering economic progress to the state would be its biggest challenge in the time to come.

Abrogation of Article 370, construction of a Ram temple in Ayodhya and introduction of a uniform civil code have, for decades, served as the three key pillars of the BJP's Hindutva agenda.

They had so far remained statements of intent because the party had lacked the requisite parliamentary strength and astute political management to overcome adverse legislative arithmetic to implement them.

But the Modi government has a reputation for taking calibrated risks when it comes to furthering its foreign policy (as was seen in Modi's unscheduled stopover in Lahore to meet Nawaz Sharif, the then Pakistan PM, in December 2015) and its ideological planks at home (witnessed by its daring foray into Muslim personal law and outlawing the practice of instant triple talaq last week).

The parliamentary passage of the bill against instant triple talaq, which the BJP projected as a gender-justice issue, and scrapping of Article 370 are set to find greater salience among the growing constituency of Hindu nationalists and position these changes as an alternative to Jawaharlal Nehru's vision of secularism.

While the law against instant triple talaq is seen by many as the BJP's march towards a uniform civil code, the majority of the public pulse in India today is against the continuation of Article 370.

The BJP's assessment was that the time was ripe for abrogation of Article 370 as most of the mainstream political parties stand accused of failing in governance, indulging in corruption - feasting on the Indian government's financial assistance to the state - and milking the autonomy issue for perpetuating the status quo.

There is little doubt that after the repeal of Article 370, the BJP will up its ante in re-shaping the future of India, calling into question the Nehruvian ideas of secularism, citizenship and federal structure and the traditional vision of India's unity in diversity.

With the opposition fragmented and in a quandary about its own future after this year's parliamentary poll debacle, the BJP is expected to push through its Hindutva planks with more aggression.

The abolition of Article 370 has set off anxiety in the entire north-eastern India where almost all the seven states have special laws barring sale of land to "outsiders" and allowing for preservation of local social and religious practices.

Should different ethnic, religious and linguistic communities be viewed through the lens of their distinctiveness and not as part of a monolithic structure?

This fundamental question will now be increasingly asked across India post-demise of Article 370.