In this editorial, the paper says that the Philippine authorities could have done more to prevent the fatalities caused by a massive landslide in a quarry area in Naga City. It also suggests that President Rodrigo Duterte should view such problems seriously.

Was it a preventable disaster — not the landslide, but the fatalities?

Reports have emerged that, before the incident, the city government and the residents themselves were, in fact, aware of signs of an impending disaster.

A month ago, Naga City Mayor Kristine Vanessa Chiong received complaints from residents about cracks that were visible on the mountain slopes of Tinaan, where cement firm Apo Land and Quarry Corp (ALQC) had been conducting quarry operations. Chiong then issued a cease and desist order to stop the quarrying activities. She also asked the Mines and Geosciences Bureau (MGB) in Central Visayas to inspect and assess the area.

The MGB, together with barangay officials and ALQC representatives, did a joint inspection on Aug 29. In their report to Chiong, they said the cracks or fissures were a “natural phenomenon” unrelated to the quarry operations; they were “not considered critical” and did not pose any imminent danger to the immediate community.

On Sept 4, the MGB regional office informed Chiong that it was allowing ALQC to resume operations. The mayor agreed, but on condition that the ground fissures be monitored and safety standards be strictly observed.

A week later, on Sept 11, ALQC reported that a 3mm crack on the north of the facility’s main tower - first noticed on Aug 31 - has become a 35-mm crack. 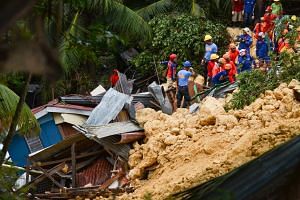 Another site evaluation was conducted on Sept 18, after which MGB officials recommended the forced evacuation of residents in Sitio Tagaytay, located on the upper slopes of Tinaan.

From residents’ accounts and the timeline given by the city government, concern about the mountain’s condition and the possible plight of the communities in the area seems clear enough.

However, only the residents of Tagaytay were evacuated, while those in Sitio Sindulan, the village at the foot of the mountain that was wiped out in the landslide, were not given sufficient warning. According to reports, that area was not among those surveyed by the MGB.

Why was Sindulan overlooked in the inspection despite its location and proximity? Why was one community saved while another was seemingly left to its own defences?

In the grim aftermath of the disaster, Chiong has downplayed the responsibility of city hall; this is not the time to play the blame game, she said.

Meanwhile, Environment Secretary Roy Cimatu has created a team to probe the accountability of at least four MGB regional officials, including the geologists who conducted the inspections. Cimatu has also ordered the suspension of quarry operations in Central Visayas and seven other regions, pending safety assessments.

Residents are clear about who should bear ultimate responsibility for what happened. During a meeting with landslide victims last week, a woman told President Rodrigo Duterte: “Stop the Apo cement quarry… We don’t need food. What we need is for the quarry to stop because I believe if the people would just work, we’d still manage to eat.”

She also went on to say that their community had been through many typhoons in the past, but there were no landslides - until now, with the quarrying operations in their midst.

Alas, as in the earlier Itogon landslide in Benguet when the President’s first impulse was to use the calamity to lash out at a pet peeve (priests and the Catholic Church) unrelated to the grave incident at hand, in Cebu, among the dazed survivors, his mind also seemed elsewhere.

First, he made a joke about the resident’s pink nail polish, before quipping: “Maayong pagka-training ni sa kuan… (She’s well trained by the…).” Then, bafflingly, Mr Duterte asked who in the audience were members of the New People’s Army, and spent the rest of his speech fuming about Jose Maria Sison and the communists.

He could have, aside from offering the disaster victims genuine succor, ordered a thorough, no-nonsense investigation of the tragedy, which is now emerging as a possible case of deadly laxity and negligence on the part of various government agencies.

Were the rampant quarrying activities in Barangay Tinaan an accident waiting to happen? And, given all the warning signs, did officials pay more than perfunctory attention?