TARAKAN (NORTH KALIMANTAN) - Joint operations by Indonesia, Malaysia and the Philippines to fight terrorism and transnational crimes in the Sulu Sea were launched on Monday (June 19) morning from Tarakan island in North Kalimantan.

The move comes as clashes in Marawi city between the Philippine armed forces and hundreds of militants from the Maute and Abu Sayyaf terrorist groups, continue into their fourth week.

The joint operation was initiated by Indonesia, Malaysia and the Philippines in the face of security challenges associated with each country's border waters, said the Indonesian military (TNI) in a statement given to reporters on Monday before the official launch.

The TNI said the joint patrol is a step taken by the three countries "in the spirit and centrality of Asean, in maintaining stability in the region in the face of non-traditional threats such as piracy, kidnapping, terrorism and other transnational crimes in regional waters".

Although a largely maritime-based operation, air and land military assets are also expected to be involved in securing the Sulu Sea, which is located to the north-east of Borneo island and south-west of the Philippines.

Maritime Command Centres (MCC) to coordinate the joint patrol have also been set up in Tarakan, as well as Tawau in Sabah, Malaysia, and Bongao, the capital of Tawi-Tawi province in the Philippines. 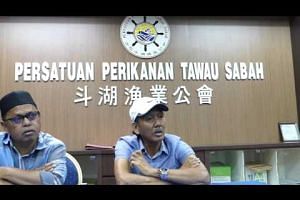 TNI chief Gatot Nurmantyo said during a speech at the launch on Monday that the three centres are part of a wider security plan discussed by armed forces chiefs from the three countries during a previous meeting in Yogyakarta.

"The MCCs in Tarakan, Tawau and Bongao will be the centres for sharing information and intelligence that serves as an important factor in supporting the trilateral maritime patrols," said General Gatot.

Maute and Abu Sayyaf terrorists, based in the restive island of Mindanao, have in recent years kidnapped dozens of tourists, fishermen and sailors in the waters surrounding the Philippine's Sulu archipelago, which include the Sulu Sea and the northern limit of the Celebes Sea.

The presence of Indonesians and Malaysians, as well as other foreigners among the Maute militants fighting in Marawi, reinforces the appeal of the southern Philippines to extremists in the region who are loyal to the Islamic State in Iraq and Syria (ISIS).

Mr Hishammuddin said the aim of this latest security initiative is to prevent South-east Asia from becoming a conflict zone where foreign fighters freely enter to join groups such as ISIS.

"What we want to avoid is a development of perceptions that there are certain areas in our region that are seen as Aleppo, Raqqa (in Syria), meaning these areas would become magnets, to which foreign fighters would be attracted to come," he said.

The Malaysian defence minister said that among those killed in Marawi thus far, aside from Indonesians and Malaysians, are also militants from Morocco, Saudi Arabia.

"If we don't address this properly, believe me, the others from Europe, New Zealand, Australia would also come," added Mr Hishammuddin. "We want to convey a very clear message that if they want to set foot here, they don't only face one country, but at least three countries that have agreed to fight as hard as they can." These threats have increased the impetus for a more coordinated response among countries in the region that share sea borders as well as those nearby such as Singapore and Thailand.

Singapore's Defence Minister Ng Eng Hen, in response to an invitation from Mr Ryamizard to participate in the joint patrol on June 3, had said Singapore is ready to play its part in any way needed.

Speaking to reporters at the end of the IISS Shangri-La Dialogue on June 4, Dr Ng noted that Singapore had offered to participate in the patrols at any time Indonesia, Malaysia and the Philippines think is appropriate. It has also offered the assistance of its Information Fusion Centre at Changi Naval Base.

"I'm glad Indonesian Defence Minister Ryamizard Ryacudu as well as Malaysian Defence Minister Hishammuddin Hussein have said that when they are more settled, they will ask Singapore," Dr Ng had said. "My reply to them is, 'We stand ready to assist in the Sulu Sea patrols or in other counter-terrorism initiatives when asked by others'. It is in our interests to do so."