GRAFTON (WASHINGTON POST) - On the road into this small city, a sign is evidence of a community in shock: "He does not represent us," it says, referring to the alleged killer few here want to even name.

But nowhere was the shock more evident than among the relatives of 28-year-old Brenton Tarrant, who has been accused of a hate-fuelled massacre that left 50 people dead in two mosques in the New Zealand city of Christchurch on Friday.

"We're all gobsmacked, we don't know what to think," Tarrant's 81-year-old grandmother Marie Fitzgerald told Australia's 9News in an interview. "The media said he's planned for a long time, so he's obviously not of sound mind, I don't think."

In Australian media, a picture began to emerge of a young man who grew up with computers as his best friends, lost in a world of violent video games and uncomfortable around girls.

Tarrant's mother and sister have been moved to a safe house by police, relatives told 9News.

His father, Rodney Tarrant, died at the age of 49, while suffering mesothelioma, a cancer of the lung, the Sunday Telegraph newspaper reported. 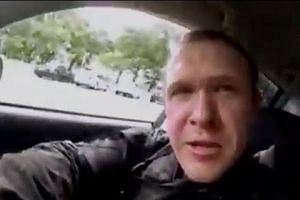 'Let's get this party started': White extremist narrated his chilling rampage in Christchurch on live video

"The individual who carried out the attacks does not represent us nor does he represent the values and beliefs of our wider community," the 41-year-old Kingsley said.

"This is an act of an individual, and our hearts go out to our brothers and sisters in Christchurch."

The town has struggled in the past two decades after many dairy farms went bankrupt and the area's sugar industry and beef cattle farms were hit hard by shrinking agricultural subsidies.

But Mr Kingsley, the descendant of Indian migrants who has spent his whole life in the Clarence Valley, said he has never heard of any white supremacist, anti-Muslim or anti-immigrant groups operating in the area and has never experienced racism.

"There is no tension between new Australians and long-term residents of the Clarence Valley," he said. "This is a quiet place, a great place to raise a family. We are a welcoming and inclusive community."

"I don't think girlfriends were on the agenda - he said getting married was too hard."

She said Tarrant may have been more fundamentally changed by a trip to Europe at a time when attacks by Islamic extremists attacks were on the rise. But even when he returned to Grafton a year ago for his sister's birthday, she noticed nothing out of the ordinary, 9News reported.

"He was just his normal self, you know. We all chatted, and we had a meal together to celebrate that occasion, and now everybody's just devastated," she told 9News. "It's just so much for everything to take in, that some in our family would do anything like this," she said, calling it "unrepairable".

Tarrant's uncle, Terry Fitzgerald, apologized to the families of the dead and injured in New Zealand. "We can't think nothing else, just want to go home and hide," he told 9News.

The shootings come as an influx of money has begun to transform Grafton, deputy mayor Kingsley said.

A new jail is being built that will house 1,700 inmates and employ 600 locals, while three bridges are being built over the Grafton River, all four projects bringing in investment of A$1 billion (S$960 million). People are also moving to the town from Sydney and other cities, attracted by cheap housing, he said.

But the changes have not papered over some deep-seated problems.

Mr Timothy McManus, 23, a religious teacher at South Grafton High School, said the town is struggling with high rates of teen suicide, prompting the government to open a mental health facility in Grafton.

"The kids are struggling with a range of mental issues surrounding the family," said Mr McManus, who also works as a youth pastor at the Hub Baptist Church in Grafton. "Then there is a lack of employment opportunities for those aged 18 to 25."

Mr Trent Shacklock, 25, a rigger who puts up steel structures, has been in Grafton six weeks.

He is helping to construct the region's new jail but says he plans to find work in another place in four months.

"It's a quiet town but there is riff-raff in the pubs who try to start fights," said Mr Shacklock, who grew up in Brisbane, a city of more than two million people 320km north of Grafton.