JAKARTA - Just a few years ago, when Mr Clifford Lee, head of fixed income at DBS, sounded out potential clients about their appetite for green bonds - debt sold specifically for sustainable purposes like building a wind farm - conversations were short and tended to end with "no".

That's because green bonds were no cheaper than their conventional cousins and sustainability for some just wasn't a thing back then. But in the wake of the Paris Climate Accord, and a series of vicious storms and steadily deteriorating air and water quality in the region's biggest cities, investors are coming around.

"There was always a long pause. Being practical Asians, it ended the conversation," Mr Lee recalled of those exploratory conversations around the beginning of the decade.

Outside South-east Asia, green bonds have been in increasing demand, giving their socially conscious sellers bragging rights that they are serious about environment. About US$130 billion of the specialised debt will be sold this year.

In South-east Asia, enthusiasm has been muted - until now. This year marks the first full year of standardised Asean rules governing how the bonds are cobbled together, certified and sold. Governments, banks and renewable energy companies in Indonesia, Malaysia, Thailand and Singapore are among the issuers. About US$4 billion green bonds will be sold in the region this year.

"There is a revolution afoot," said Mr Sean Kidney, chief executive of the Climate Bonds Initiative, an NGO focused on green bonds.

"People want cleaner air, cleaner water and that is going to take financing."

In November last year, regulators, through the Asean Capital Markets Forum, set rules governing who may sell green bonds, how they're certified and which projects may qualify. A gas-powered electricity plant, for example, is a non-starter. 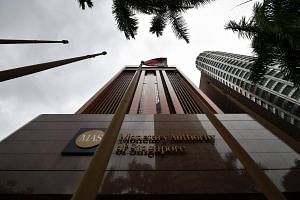 Can Singapore be an Asian hub for green finance?

The rules also compel green bond issuers to disclose information on individual projects and how proceeds of the bond sale are spent.

Cyclists in Jakarta this month occupied the capital's Dutch colonial city hall to threaten court action against the local government of Governor Anies Basweden to clean up air pollution. Research last month from the University of Chicago indicated air pollution in the worst affected parts of India can shorten life expectancy by a decade.

Elsewhere, wild fires in California in November, which destroyed 14,000 homes and claimed 85 lives, were the state's deadliest. A trio of hurricanes and other storms in the United States last year caused a record US$306 billion in damages.

The International Energy Agency has said some US$53 trillion in new infrastructure will be needed by 2035 to avoid a sharp increase in global temperatures.

But there are signs the infrastructure is not getting built fast enough. Worldwide carbon emissions grew 2.7 per cent this year compared with 1.6 per cent last year as motorists drove more.

Mr Lee of DBS says that as the world focuses on the impacts of climate change, fund managers, companies and governments will be under increasing pressure to show clients they are investing sustainably. "Going forward it is going to be necessary to have long-term sustainability plans," he said. "It's not something that is simply nice to have."

DBS Bank this year advised on a US$580 million sale of green bonds by Jakarta's Star Energy Geothermal to refinance bank loans used to buy two Chevron geothermal fields in Indonesia's West Java. HSBC advised the Indonesian government on its US$1.25 billion green Islamic bond - the first such instrument.

Indonesian officials overseeing the bond sale said the government was eager to show it was serious about meeting its commitments under the Paris climate agreement. Indonesia is a perennial target of environmentalists for failing to curb deforestation linked to oil palm plantations.

"The government of Indonesia has a vision and a mission to combat climate change," said Mr Luky Alfirman, director-general of budget financing at the Ministry of Finance.

"The key benefit (of the green bond sale) was to raise Indonesia's image as a leader in sustainable finance."

Elsewhere, in Thailand, TMB Bank sold the country's first green bond with a US$60 billion offering in June.

In April, Malaysia said it would offer grants to help offset the cost of setting up green Islamic bonds, known as sukuk, following a launch of a RM250 million (S$82 million) green Islamic bond by renewable energy company Tadau a year earlier to help finance a solar power station.

To be sure, there are limits to the usefulness of green bonds.

Mr Rudy Suparman, Star Energy's chief executive, says regulation can be a bigger headache. Indonesia's caps on electricity prices crimp profit in a business where it costs US$10 million to drill a single well.

"We're very happy with the sale. There was a lot of interest," Mr Rudy said.

But the government caps on tariffs means "there's no room for error".

Mr Rudy is not sure if a green bond is even necessary for a company that has the word "geothermal" in its name. Star Energy generates electricity from steam produced by hot rocks 1,500m deep, giving him all the green bragging rights he needs.

"This is our business," Mr Rudy said. "We aren't doing anything extra for this."

But making the sales of green bonds more commonplace in South-east Asia will hinge on incentives and education.

Last year, the Monetary Authority of Singapore said it would reimburse green bond auditor fees up to a cap of S$100,000. It's a good start but regulators need to talk up the product more, Mr Kidney said.

"They need to explain what it is and what it does. We need investors to say they want it and we need deal flow," Mr Kidney said.

"The goal is to flush out potential issuers."