BISHKEK (REUTERS) - Kyrgyz security forces detained former president Almazbek Atambayev on Thursday (Aug 8), Russia's Interfax news agency reported, a day after a failed attempt to arrest him led to at least one death in violent clashes with his followers.

Atambayev, who was initially wanted for questioning as a witness in an investigation, was taken to the interior ministry's investigative unit. Some Kyrgyz media reports suggested he had given himself up.

The stand-off between Atambayev and his successor and former protege President Sooronbai Jeenbekov, risks destabilising the Central Asian nation which hosts a Russian military airbase and is a major centre for gold mining.

During the previous day's botched raid, one member of the security forces was killed and six others were captured by Atambayev's followers, the authorities say.

President Jeenbekov ordered unspecified "urgent measures" on Thursday to maintain the rule of law. He told parliament that Atambayev, previously wanted as a witness, was now wanted for "a grave crime".

Atambayev, who helped Jeenbekov to power in 2017 but whose relationship with the president then soured, says corruption allegations against him are politically motivated.

Atambayev and his supporters initially announced plans on Thursday to rally in Bishkek and march towards the building which houses both parliament and the president's office. 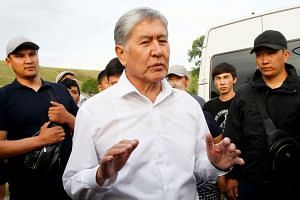 But Atambayev did not show up and remained holed up in a village near Bishkek, and his supporters abruptly called off the rally. One of its organisers told about 200 people who had already gathered that they would instead help guard his house against a potential second raid.

"Yesterday. we were summoning him as a witness, now we will summon him over a grave crime," Jeenbekov told parliament.

Parliament accused Atambayev of corruption and stripped him of immunity from prosecution in June.

"Unfortunately, the authorities have not listened to my calls to act legally," Atambayev said in a video address posted online.

Kyrgyzstan has been politically volatile: presidents were deposed by uprisings in 2005 and 2010. Atambayev, who took part in both revolts, helped to ensure a smooth succession and hoped to retain influence by installing then-ally Jeenbekov as successor in 2017.

But within months, Jeenbekov purged Atambayev loyalists from the Cabinet.