Zhao, the head of the party’s Organisation Department which oversees personnel decisions, is taking over the role from Chinese President Xi Jinping's close ally Wang Qishan.

Zhao was also unveiled as one of the seven members of the Politburo Standing Committee, China's top leadership team, along with Xi and Premier Li Keqiang.

Zhao was elevated to the Politburo at the previous party congress in 2012, along with his appointment to head the party's powerful Organisation Department.

As the party's top personnel chief, he oversaw decisions for thousands of senior jobs in the party, government, military, state-owned enterprises and other key bodies.

He hails from Xi’s home province of Shaanxi and was its party secretary from 2007-2012.

He is now seen as one of Xi’s close confidants and part of the rising Shaanxi clique of leaders from the north-western province, on whom Xi appears to rely. 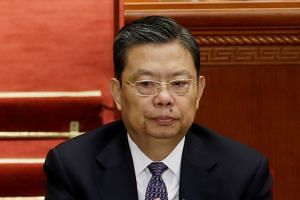 In his new role, Zhao will have to see through the anti-graft drive in a series of "intensified efforts to address corruption that occurs on the people's doorsteps", in line with Xi's key speech at the close of the party's 19th national congress on Tuesday.

Born in Xining, the capital city of north-western Qinghai province in 1957, Zhao joined the Chinese Communist Party in 1975.

For more than a decade, Zhao, who studied philosophy at Peking University, has been seen as a rising star in provincial leadership. In 2000, he became Qinghai governor at the age of 42, making him the youngest governor in the country at the time. His promotion to Qinghai party boss three years later made him the country's youngest provincial party secretary, at age 45.