Forces supporting Koike captured a total of 79 seats out of the 127 seats up for grabs in the election, with Koike's Tomin First no Kai (Tokyoites First party) winning 49 seats, and its major ally in the metropolitan assembly the Komeito party securing 23 seats. Abe's ruling LDP, meanwhile, won only 23 seats, its lowest-ever level in a Tokyo metropolitan assembly election, according to local media.

Koike, a media-savvy ex-defence minister and former LDP member, took office a year ago as the first female governor in the capital, defying the local LDP chapter to run and promising to reform governance of a megacity with a population of 13.7 million and an economy bigger than the Netherlands'.

"I am excited but at the same time, I am also keenly aware of the weight of my responsibility," Koike told NHK, adding the results had exceeded her expectations.

Here are 10 things about Koike:

1. BORN IN AN AFFLUENT FAMILY, SHE WAS EXPOSED TO FOREIGN CULTURE AT A YOUNG AGE

Ms Koike grew up in an upscale neighbourhood in the port city of Kobe. In the late Meiji era, her merchant grandfather founded a trading company in Seattle, the United States. Her father Yujiro also ran a trading company dealing in oil and travelled frequently to Arab countries on business trips. As a child, she came into contact with foreigners and their customs and traditions.

2. AN ARABIC AND SOCIOLOGY GRADUATE FROM EGYPT UNIVERSITY

She dropped out of a sociology course at Kwansei Gakuin University in western Japan in 1971 and enrolled at the American University in Cairo, Egypt, where she studied Arabic and sociology. The decision was partly due to her father. "Japan can only survive with the help of oil imports from the Arab countries," he had told her. "Even though we are so dependent on the Arab countries, the Japanese don't understand them." In 1976, she became the second Japanese national to graduate from the university, earning a bachelor degree in sociology. 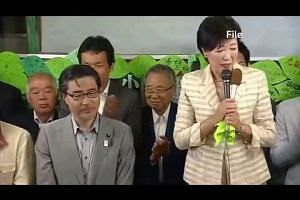 3. A PROFICIENT TRANSLATOR AND INTERPRETER

Ms Koike worked as a translator and interpreter after returning to Japan from Egypt. In 1978, she interviewed ousted Libyan dictator Muammar Gaddafi and the late Palestinian Liberation Organisation chairman Yasser Arafat for a Nippon TV special programme.

4. FROM TV ASSISTANT TO NEWS ANCHOR

Her strength in translation and interpretation led her to a job as an assistant on a Nippon TV talk show hosted by popular political commentator Kenichi Takemura. Unlike other assistants, she would voice her opinion and sometimes even opposed Mr Takemura's views. She became a TV anchor from 1985 to 1992, including a stint as anchor of a stock market programme at TV Tokyo and anchor of the station's popular daily business news programme World Business Satellite.

5. SHE JOINED POLITICS TO CHANGE JAPAN

When former Kumamoto prefecture governor Morihiro Hosokawa founded the Japan New Party in 1992, he invited Ms Koike to join the party and run for a seat in the House of Councillors, Japan's upper house. Aware that she could not change Japan if she remained a journalist, she accepted the offer. That year, she was elected to the House of Councillors, and in the following year, she won a seat in the House of Representatives, the lower house.

6. FIRST WOMAN TO RUN FOR LEADERSHIP OF BIGGEST POLITICAL PARTY

In 2008, Ms Koike announced that she would run for the presidency of the LDP. She was the first woman to aim for the top post of Japan's largest political party and the premiership that usually comes with it. Although she was strongly supported by her mentor, former prime minister Junichiro Koizumi, she lost the contest. Nevertheless, she came in second in popular vote, a sign of her strong support among the Japanese.

7. THE BRAIN BEHIND "COOL BIZ" CAMPAIGN

She served as environment minister from 2003 to 2006 under Prime Minister Junichiro Koizumi. She was known for promoting casual dressing during summer to save power by reducing the need for air conditioning. The "Cool Biz" campaign was widely adopted by private employers, and now most men go without tie and jacket in the summer.

Ms Koike shot to political stardom in 2007 when she became the country's first female defence minister, a post she held for slightly more than a month. She was appointed to the post after her predecessor Fumio Kyuma resigned for suggesting that the 1945 American atomic attacks on Japan were inevitable. But Ms Koike soon stepped down from the position to take responsibility for a scandal in which Japanese naval officers were found to have leaked classified information.

9. A FAN OF HILLARY CLINTON AND MARGARET THATCHER

She is an admirer of Mrs Hillary Clinton, former US secretary of state and Democratic presidential nominee, and the late Mrs Margaret Thatcher, former British prime minister. She frequently publishes essays on international issues, including one that refers to Republican presidential nominee Donald Trump's election campaign as "loutish."

Ms Koike met a Japanese man while studying in Egypt and they got married when she was only 21 years old. But they divorced soon after.