March is a busy month for China's media and paparazzi.

The annual session of the country's top political advisory body, the Chinese People's Political Consultative Conference (CPPCC) - which usually opens two days ahead of the annual meetings of the National People's Congress (NPC), or China's national Parliament - is a star-studded event.

Famous athletes, entertainment celebrities, political princelings and business tycoons are among the more than 2,000 CPPCC delegates who gather at Beijing's Great Hall of the People to discuss political, social and economic issues, and offer proposals.

The media and the paparazzi lie in wait of such well-known personalities, snapping pictures, filming videos, and getting soundbites from them as they arrive at or leave the meeting venue.

Here are some of the famous figures to look out for this year.

Director and actor Feng Xiaogang, 58, enjoys a string of domestic box office successes, including Assembly and If You Are The One.

He took the best director title for I Am Not Madame Bovary at the Golden Horse Film Awards in Taiwan in 2016. The movie stars top actress Fan Bingbing playing a peasant who sues her swindler ex-husband. 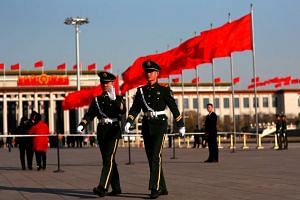 Things to know about the NPC and CPPCC

In 2015, Feng also won the Best Leading Actor award for his performance in the film Mr Six.

At a CPPCC meeting in March 2014, delegates from the culture and entertainment industry discussed why China has yet to produce popular drama serials like those by South Korea.

Some blamed it partly on China's censorship.

“My heart trembles,” Feng said, describing how he felt whenever he waited for his movie to go through the rigorous censoring procedure.

Hong Kong action star and leading film-maker Jackie Chan, 62, was given an honorary Oscar in the recent Academy Awards.

The popular star has made more than 200 films, including Kung Fu Yoga and Dragon Blade, during his 56 years in the movie industry.

In March 2015, Chan had expressed unhappiness over the media's presence at the annual session of China's top advisory body in Beijing.

"There are so many reporters here, what can I say? I can't say anything," he was quoted as saying then by a report on China.org.cn.

"I prepared my speech but I can't read it. I have worked hard for decades, from humble beginnings to now, when I have such status. I really want to do something for the country and the people, for Hong Kong. But I can't say anything sincere, because it will not just hurt me, but also my family. My wife always told me to be careful. She asked, 'Can you just not speak at all?'"

Chan had suggested that reporters be barred from some panel discussions so that CPPCC delegates could communicate freely with one another.

He has previously drawn widespread criticism for his pro-Beijing remarks.

Renowned Chinese military folk singer Song Zuying, 50, and Hong Kong gongfu star Jackie Chan made news at the March 2014 CPPCC session - all because of a cuddle he gave her.

Some social media commenters accused Chan of flirting with the singer, who was the director of a People's Liberation Army song and dance troupe. They reminded him that he was not going to a night club or on a date, the South China Morning Post reported.

Chan had dismissed the incident online as "a lot of fuss over nothing".

Song is one of China's most recognised entertainers. She has performed globally and was nominated for a Grammy.

Former President Jiang Zemin has long been rumoured to have conducted an affair with Song, a native of the Miao ethnic group.

Singer Han Hong, 45, was the winner of the popular I Am A Singer competition in March 2015.

At the March 2015 CPPCC session, Han, who is also a philanthropist, voiced her concern about girls left behind by their parents in the rural areas who face a higher risk of being sexually abused.

As more parents from the countryside head to cities to work, many are leaving their children behind with their grandparents or other relatives. There have been more reports of abuse of the so-called "left-behind kids".

Han, who is of mixed Tibetan and Han ethnicity, had also presented a proposal on how to combat smog.

Acclaimed director Chen Kaige was the first Chinese director to win the Palme d'Or at the Cannes Film Festival in 1993, with his movie Farewell My Concubine.

Chen, 64, said at the March 2016 session that he has high expectations for China's art culture, but he feels that Chinese Internet dramas are not trying hard enough to achieve artistic goals.

Still, he noted that Chinese people are putting more emphasis on their spiritual lives and paying more attention to artists, the People's Daily reported.

At the March 2013 CPPCC session, he had lamented that the poor quality of the air in Beijing had made it hard for him to concentrate on his work.

Describing the air pollution as "appalling" and "unbelievable", he was cited by the official Xinhua news agency as saying: "Cornered by the terrible weather, I have nowhere to go... I am unable to focus on my artistic creation."

He had been criticised for his reluctance to speak out against the government.

Defending his win, Mo, author of Red Sorghum and The Garlic Ballads, had told reporters in 2012: "I believe a lot of my critics haven't read my books. If they read my books, they would realise they were written under great pressure and exposed me to great risks."

A former soldier, Mo chose his pen name, which means "don't speak", to remind himself not to speak too much.

He also urged more protection and innovation of local folk opera Maoqiang, which originated in his hometown, Gaomi, in eastern China's Shandong province.

At the March 2015 session, Yao had focused on the issue of improving students' health and fitness.

He urged students to train to be good at at least one sport. He made the comment when asked at the meeting for suggestions on how to build a better China.

"This helps them keep the habit of physical exercises," said Yao, who also proposed extending duration of PE classes nationwide.

But injuries forced Liu to retire in 2015 when he was 31 years old.

Before 2013, Liu was reportedly absent from four of the five CPPCC meetings and rarely submitted any proposals. Many had mocked him as someone out to buy soya sauce, which refers to a passer-by.

At the March 2015 CPPCC session, Liu raised the issue of the need to improve China's sport industry, stressing that service is one of the key areas to look at.

"Sport industry is not just sports gear manufacturing, but of many things and service should be an important one," he said.

"Sport service industry is a specialised field and needs well-trained professionals. I hope retired athletes can join (the industry)," he added.

Hong Kong veteran actress Liza Wang, 69, was appointed delegate to the CPPCC in 1998.

At the March 2013 CPPCC session, she had voiced concerns about the living conditions of Hong Kong people, amid mounting problems caused by many mainland Chinese rushing to bulk buy milk power in Hong Kong. There was also a shortage of hospital beds at Hong Kong's maternity wards as pregnant mainland women flocked there to give birth.

Earlier in 2008, she proposed that Beijing grant home-return permits to Hong Kong's pro-democracy lawmakers barred from travelling to the mainland.