The Chinese President, in his New Year's address, expressed concern for Hong Kong, which has been gripped by more than six months of often violent demonstrations by activists demanding greater autonomy from Beijing.

Mr Xi argued that the success of neighbouring Macau, which he visited last month, shows that the "one country, two systems" framework used to govern both former European colonies "is fully applicable, achievable and popular".

"Without a harmonious and stable environment, how can people live in peace and enjoy their work?" Mr Xi asked. "I sincerely wish Hong Kong well. Hong Kong's prosperity and stability are the wish of Hong Kong compatriots and the expectation of our motherland."

His remarks come at a time when the "one country, two systems" policy is facing renewed scepticism in Hong Kong and Taiwan.

Mr Xi started last year with a speech reaffirming his desire to use the same framework to bring Taiwan, a self-ruled island of 23 million people, back under Beijing's control.

That prospect was rejected by Taiwan's President Tsai Ing-wen, who, in her speech to mark Chinese New Year 2019 in Taipei, said the island was committed to upholding the values of freedom and democracy.

President Tsai, who faces elections on Jan 11 against a more China-friendly opponent, Kaohsiung Mayor Han Kuo-yu, said last September: "Hong Kong is an example to show 'one country, two systems' is not feasible, as democracy and authoritarianism cannot coexist in one country."

Yesterday, she praised a vote by Taiwan lawmakers to approve an anti-infiltration Act, which curbs political donations, lobbying and election interference by "external hostile forces". 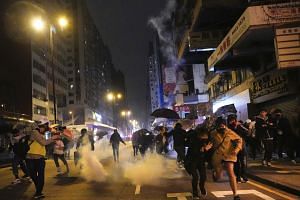 Mr Xi's comments on New Year's Eve were only his latest allusion to Hong Kong's turmoil in recent months, an indication of greater interest from Beijing in the unrest in the former British colony.

Mr Xi and other top leaders had said little about Hong Kong in the first months after massive protests erupted last June.

Mr Xi's speech was otherwise broadly confident, as China's economic slowdown shows signs of stabilising and the country nears completing a "phase one" deal to ratchet down a trade war with the United States.

The Chinese leader said the year 2020 is a "milestone year".

"We will achieve a moderately prosperous society, win the battle against poverty and lift all rural residents out of poverty."