TOKYO (AFP) - With refreshing slurps of sake and solemn Shinto rites, Japanese rang in a new imperial era in festive mood Wednesday (May 1) as Naruhito became their 126th emperor.

Unseasonable rain had somewhat dampened the party atmosphere for Tuesday's historic abdication of Emperor Naruhito's father Akihito, with only a handful of hardy souls cowering under umbrellas to pay their respects at Tokyo's sprawling Imperial Palace.

But the skies cleared Wednesday for the first day of the "Reiwa" era - meaning "beautiful harmony" - and the Japanese, enjoying an unprecedented 10-day holiday, packed into Meiji Jingu shrine in central Tokyo to celebrate.

As crowds lined the path, some 30 Shinto priests wearing traditional white robes and tall black hats marched under a huge gate towards the main building to conduct a festive ceremony to "report" the new emperor's accession to his ancestors, the Shinto gods.

And thirsty revellers rushed to scoop up "masu" or plain wooden blocks filled with sake, with 1,000 free cups gone in just 30 minutes.

Shrine maidens wearing white robes and bright orange "hakama" or wide-legged trousers dished up the rice wine that is synonymous with Japan from a wooden barrel using a long ladle.

"The sake is delicious," said Ms Midori Okuzumi, 49, who travelled from eastern Tokyo with her husband Hirokazu for the celebrations. 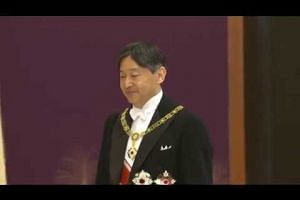 "It's a slight shame that the masu (wooden cups) ran out before our turn came but it's still tasty," she said, clutching a small paper cup instead.

Office worker Kiyohiko Izawa, 28 and his wife Naoko, also 28, who works at a bank, visited the shrine to report their marriage to the Shinto gods.

"I'm happy that we were able to report our marriage on the first day of Reiwa," said Ms Naoko.

The change of era is a huge event in Japan, on a par with the accession of a new emperor. Several couples chose to get married on the stroke of midnight and there were long queues at post offices to get stamps bearing the first day of the Reiwa era.

And some people went to extraordinary lengths to ring in the new era.

With early-morning clouds casting a shadow over the first sunrise, around 80 people paid for a specially chartered plane to soar above them to capture dawn breaking over the Japanese Alps.

"Although passengers could not see Mount Fuji due to bad weather, they were able to enjoy the first sunrise of Reiwa," Mr Sho Inoue, an airline company spokesman, told AFP.

Around 370 early birds travelled to Nemuro on the island of Hokkaido, one of the easternmost points of Japan, in a bid to be the first to see the sunrise but clouds cast a shadow on proceedings there.

Other went to watch the formal ceremony and Emperor Naruhito's first speech on massive screens outside Shinjuku, the world's busiest train station.

Gazing up at the screen, 21-year-old law student Mito Okuno said she had come from Himeji, some 600km to the west of Tokyo, to savour the historic moment.

Dressed in a striped orange, red and black kimono, Ms Okuno told AFP: "I am someone who loves history and what we are experiencing now will be talked about for a long time." "That's why I wanted to come in person."

Emperor Naruhito officially became emperor at midnight and several hundred braved torrential rain to cram into the famous "scramble" crossing at Shibuya to count down to the new era.

Ms Tamae Moriyama, a 48-year-old restaurant worker, said she hoped the historic events would spark a debate about women ascending the throne, which is currently forbidden.

"I hope that women will one day be able to take the throne like in Britain. I am happy that the subject is being debated. Times have changed but the imperial system has not changed with them," she told AFP. 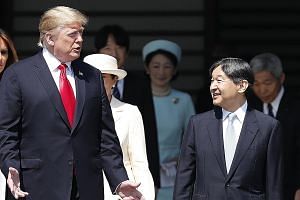 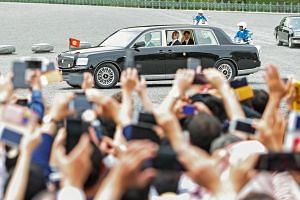 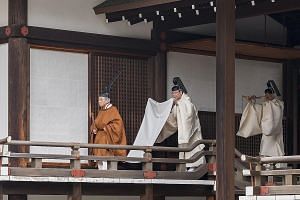 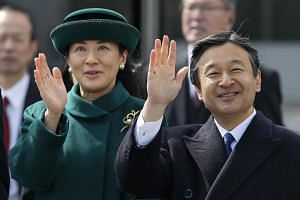 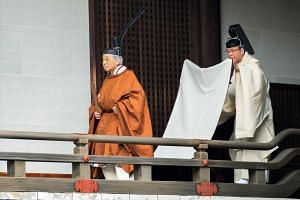 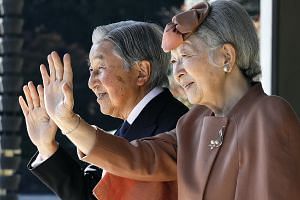 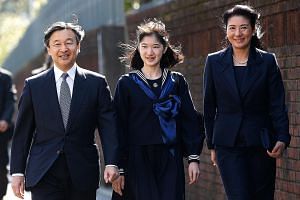