HONG KONG - Hong Kong leader Carrie Lam now has muscles to push through contentious proposals that would boost housing supply, including taking back part of an iconic golf course and a massive land reclamation in Lantau.

This comes after lawmakers in the Executive Council "fully endorsed" eight suggestions put up by a government-appointed land supply task force to look into ways to ease the city's housing crunch, which has made it the world's least affordable property market.

Secretary for Development Michael Wong on Wednesday afternoon (Feb 20) said at a press briefing that the government would push through with all eight suggestions of the task force.

The announcement on Wednesday came nearly two months after the task force submitted its report to the government, in which it suggested ways to generate some 3,000ha of land for development.

Describing this as "not an easy decision", Mr Wong said the government would take back 32ha of the exclusive 172ha Fanling golf course, home to the Hong Kong Golf Club, to build homes of which the bulk would be public housing.

To ease the transition, Mr Wong said the government would take the land back three years after the current golf course lease ends in August 2020.

Construction could begin as early as 2024.

The remaining 140ha of the golf course would remain untouched and the lease would be extended until mid-2027.

The development bureau would conduct a detailed study in the later half of the year to look into the number of units that could be built, the development timeline and funding needed. 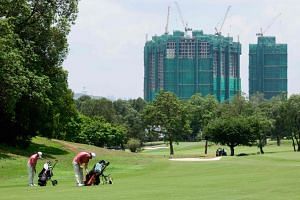 The study, to wrap up in the first half of 2021, would also explore the environmental and ecological impact of developing this land.

The proposal to take back part of Fanling golf course has had golfers fuming, as they said it would hinder deal-making, since many bankers and businessmen play the sport.

Said Mr Wong: "As the chairman of the task force said, there's no painless solution. The decision of CE (chief executive) in council reflects a very careful balance of the needs of the community in the short to medium term for more housing, in particular public housing, and also the contributions of Fanling Golf Course to golf development in Hong Kong and also to its uniqueness in terms of ecological value, historical value... so that's a balancing act and I hope the community can understand that."

The government would also ask the Housing Society to end an ongoing study into building homes around country parks - an idea pitched by the previous administration.

It would also start feasibility studies on converting brown field sites and a land reclamation project east of Lantau.

In October last year, Mrs Lam pitched a plan in her policy address to reclaim 1,700ha of land to build man-made islands off Lantau Island, known as the Lantau Tomorrow Vision.

The idea, reported to have a price tag of at least HK$500 billion (S$86.1 billion), was met with waves of criticism from environmentalists and the opposition lawmakers, who slammed it for the exorbitant cost and potential damage to marine life.

But under the task force's recommendation, land reclamation off Lantau would span 1,000ha.

"That's the vision, that hasn't changed yet," said Mr Wong, who added: "We will focus our efforts on the 1,000ha of land to be reclaimed around Kau Yi Chau. With regard to the 700ha of land around Hei Ling Chau, at the moment's there's no timetable."