Mr Jack Ma, the 53-year-old founder of e-commerce titan Alibaba, said at an entrepreneurs' summit in China earlier this week that actually, those who earn in a month what many people can't even dream of earning in several life times don't have it good at all.

"The average man would be quite happy to earn 1 or 2 million yuan a month," he said at the forum in China's eastern city of Hangzhou on Wednesday (Nov 29), Chinese media reported.

"But those who earn 1 or 2 billion yuan a month don't really have it good because the money is no longer yours. It's not yours to spend; you have to use it on other things," the billionaire, who is worth some US$37.4 billion, was quoted as saying.

In typical Chinese fashion, Mr Ma used food - hotpot shops in China - as an analogy. Small hotpot shops feed everyone in a community, he said; mid-sized restaurants can cater to residents in a city like Hangzhou, while only large chains like the Haidilao group of hotpot restaurants can feed the entire nation.

But, he warned: "The more you do, the more responsibilities you have, and the more problems you will encounter."

What you get, he said, is merely "indirect happiness" and not the normal happiness that the average person enjoys.

The outspoken former English teacher is no stranger to controversy. He is known for making unusually frank comments and recently made headlines for making a gongfu movies starring himself as a gongfu master. 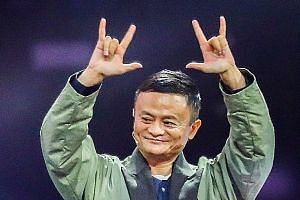 The many faces of Alibaba founder Jack Ma 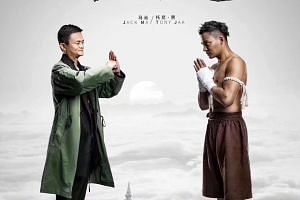 But he claimed at the entrepreneurs' forum that he was "anxious" every day, given what he has achieved. "Money and good products can no longer bring me happiness. Only by improving people's lives can I be truly happy," he quipped.

Alibaba, by comparison, reported sales of US$25.4 billion in only 24 hours for its annual Singles' Day sales extravaganza on Nov 11.

Another said: "Since I met Ma Yun, I've had two major successes - login success and payment success. I also have my own car now: a shopping cart."