TOKYO (AFP) - The wife of former Nissan chief Carlos Ghosn has alleged that her husband is being held in "harsh" conditions and subjected to round-the-clock interrogations intended to extract a confession.

In a letter to Human Rights Watch, Mrs Carole Ghosn urged the group to highlight the case of her husband, who has been in detention in Japan since his shock arrest on Nov 19 and faces three charges of financial misconduct.

The nine-page letter says the former high-flying executive is held in cell that is lit even at night, and is denied his daily medication.

"For hours each day, the prosecutors interrogate him, browbeat him, lecture him, and berate him, outside the presence of his lawyers, in an effort to extract a confession," the letter says.

It claims prosecutors have pressed Ghosn to sign documents in Japanese, which he does not understand, providing only an oral translation, and without his lawyer present.

"I urge Human Rights Watch to highlight his case... to press the government to reform its draconian system of pre-trial detention and interrogation," the letter adds.

Ghosn's ongoing detention has prompted some international criticism of Japan's legal system, which permits prosecutors to hold suspects while they investigate an allegation, and also allows lengthy pre-trial detention once charges have been filed. 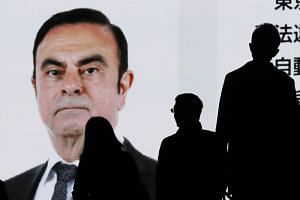 Carlos Ghosn comes down with fever in jail, halting interrogation

Nissan chairman's fall from grace: Who is Carlos Ghosn and why is he in trouble?

Ghosn's lawyer has acknowledged his client is unlikely to be freed before a trial, and that the case could take six months to come to court.

The former Nissan chief has so far been denied visits from anyone except his lawyers and diplomats from the three countries where he holds citizenship - Brazil, France and Lebanon.

His lead lawyer Motonari Otsuru also denied last week that Ghosn was being pressured to sign documents or a confession in Japanese.

"Not once has Mr Ghosn said to us he has any concerns about being asked to sign something in a language he doesn't understand," he told reporters.

He also said Ghosn had now been moved to a larger cell with a Western-style bed, adding that his client had not complained to him about the conditions of his detention.

Ghosn faces charges of under-reporting his compensation, trying to shift personal losses onto Nissan books, and using company funds to repay a friend.

He denies wrongdoing and, in a first court appearance, last week said he had been "wrongly accused and unfairly detained".