TOKYO (NYTIMES) - Mr Carlos Ghosn, the man who created what is effectively the world's largest carmaker, was arrested in Japan on Monday (Nov 19).

The arrest is a remarkable fall from grace for a man regarded as one of the most powerful executives in the auto industry.

The arrest has been a jolt to an industry facing challenges from a global trade war, a shift toward electric cars as well as competition from non-traditional carmakers.

An internal inquiry at Nissan found that Mr Ghosn, its chairman, under-reported his compensation to the Japanese government. Nissan is cooperating with prosecutors, who said Mr Ghosn declared only half of about US$88 million (S$120.84 million) that he was paid between 2011 and 2015.

Nissan said its investigation was prompted by a whistle-blower who said that Mr Ghosn had been misrepresenting his salary and using company assets for personal purposes.

Mr Greg Kelly, Nissan's first American director and its former head of human resources, has also been arrested. The two men are suspected of masterminding a long-running scheme to mislead financial authorities. Neither man has yet been charged.

2. Why is he still being held?

Prosecutors in Japan can hold a suspect for 72 hours for initial questioning. On Wednesday, prosecutors asked for a 10-day extension as they continue their investigation.

The prosecutor's office can request additional extensions from the court to hold Mr Ghosn for up to a total of 23 days before it decides whether to seek an indictment.

If Mr Ghosn is found to have violated Japan's financial laws, he could be sentenced to up to 10 years in prison, fined 10 million yen (S$121,000) or both.

If Nissan is found to have conspired with him, it could face a fine of up to 700 million yen.

The Japanese companies have been quick to consider severing ties. Nissan's board will meet on Thursday to discuss stripping Mr Ghosn of his position as chairman. Mitsubishi has said it will look to remove Mr Ghosn as chairman and conduct its own investigation into his conduct. 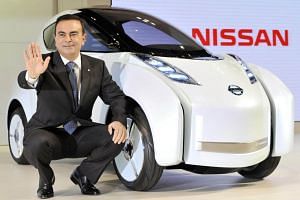 Fractured Nissan board gathers for high-stakes clash over Carlos Ghosn

Renault has been more cautious. It is keeping Mr Ghosn as chairman and chief executive, but the board has tapped Mr Thierry Bolloré, the chief operating officer, to assume Mr Ghosn's day-to-day responsibilities. Mr Philippe Lagayette, the board's lead independent director, will take over as chairman temporarily.

The French government is Renault's biggest shareholder. The Finance and Economy Minister, Mr Bruno Le Maire, said France had no evidence of the accusations that Mr Ghosn faces in Japan.

But labour unions are already concerned about the affect the arrest could have on the more than 47,000 workers at Renault.

Yes. But chief executives do - and Mr Ghosn had a reputation for rewarding good performance and expecting to be rewarded for his job performance.

After he took over as chief operating officer at Nissan in 1999, Mr Ghosn overhauled how senior employees were paid. Instead of the Japanese tradition of rewarding seniority, Mr Ghosn enforced a performance-based system and gave bonuses to mid-level managers.

According to the Tokyo prosecutor's office, he is being investigated for hiding tens of millions of dollars' worth of compensation from 2011 to 2015.

Prosecutors said he under-reported his pay package by more than five billion yen - understating his true earnings by half - in reports to a bureau of Japan's Ministry of Finance.

Mr Ghosn has been embroiled in several fights over his executive pay, attracting the ire of investors and politicians.

In 2016, Mr Emmanuel Macron, the French President, who was at the time the Finance Minister, pressured Renault into reducing Mr Ghosn's compensation.

His salary came under scrutiny again the next year, and in 2018, he agreed to a 30 per cent pay cut in return for another four-year term as chief executive.

His own pay far outstripped those of his counterparts in Japan - he earned four times the pay of Toyota's chairman in 2017 - and he was unrepentant.

5. How did he earn the nickname 'Le Cost Killer'?

Mr Ghosn joined Renault in 1996 as executive vice-president overseeing manufacturing, purchasing, research and development, after 18 years at Michelin, the tyre-maker. Renault was reeling from a failed merger with Volvo and Mr Ghosn slashed costs to improve margins, earning him the nickname "Le Cost Killer".

"It's sexy," he said of the moniker this year. "There's blood in it, there's meanness."

In 1999, Renault acquired a large stake in Nissan and Mr Ghosn was sent to Japan to become chief operating officer.

Months later, he closed five domestic factories and eliminated about 21,000 jobs, some 14 per cent of the workforce.

Mr Ghosn was pilloried in the press, but the aggressive cost-cutting worked and stabilised Nissan finances.

He is seen as an innovator for how he later engineered an arrangement that allowed the two automakers to operate like a single carmaker, sharing the cost of developing new models and buying components together.

He had a lot of titles. He was appointed chief executive at Nissan in 2001 and Renault in 2005.

In 2016, Nissan acquired a 34 per cent stake in Mitsubishi, bailing the company out after it was caught falsifying fuel economy estimates. Mr Ghosn drew Mitsubishi into the alliance - and drew in a third salary.

He stepped down as Nissan's chief executive last year, but remained as chairman and continued to lead the alliance.

Mr Ghosn had been planning a merger of Nissan and Renault companies to cement the partnership, but faced opposition on both sides, according to reports from Bloomberg News and The Financial Times.

He was lionised in business circles, seen as the epitome of a high-flying, multi-tasking manager as he zipped between Paris and Tokyo.

He had homes in Paris, Amsterdam, Beirut and Rio de Janeiro, was a regular at World Economic Forum panels in Davos, Switzerland, and celebrated his 2016 marriage in a high-profile fashion at Versailles, with actors dressed in 18th-century costume.

His life was even chronicled in manga comic books.

But in Japan, he was a rarity: a foreign leader at a domestic company, who instituted equally rare layoffs and was paid handsomely compared with other Japanese leaders, if not by international standards.

The allegations against Mr Ghosn could trample his legacy. An economist from Japan Macro Advisors in Tokyo described his arrest this way: "Losing Mr Ghosn from the Japanese corporate managerial scene is a loss for Japan. We need more non-Japanese corporate bosses who are willing to take risks, propose a vision and exert top-down leadership."