SEOUL (AFP) - Despite years of hostility between Washington and Pyongyang, hundreds of Americans visited the reclusive nuclear-armed state every year until the US State Department finally issued a travel ban on North Korea last September.

The North has a history of detaining Americans and using them as bargaining chips, with many only released following a visit by senior US officials.

Americans made the high-risk journey to North Korea for a range of reasons, from holidays and business trips to humanitarian work and missionary purposes.

Six South Koreans have also been detained - three Christian missionaries and three defectors originally from North Korea - since 2013, with Seoul also pushing for their release.

President Donald Trump hinted on Wednesday (May 2) of imminent news about three Korean-Americans detained in the North, after sources said they had been relocated ahead of a possible release.

The development comes with Mr Trump preparing for a historic summit meeting with North Korean leader Kim Jong Un in the coming weeks amid a dramatic diplomatic thaw on the flashpoint peninsula.

These are the US citizens now being held:

Kim had been working for the Pyongyang University of Science and Technology (PUST) undertaking agricultural development work with the school's farm.

He was arrested at Pyongyang railway station in May 2017 on suspicion of committing "hostile acts" against the government, as he was boarding a train headed for his home in Dandong, China. 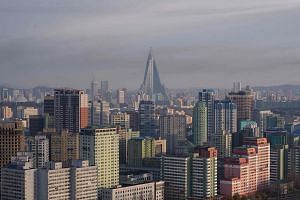 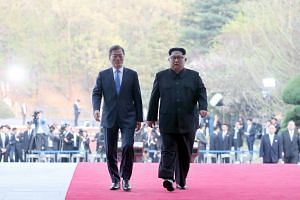 Kim, who is in his mid-50s, was born in Jilin, China, and educated at a university in California, CNN reported, citing a man who had studied with him. He said Kim returned to China after about 10 years of living in the US.

PUST was founded by evangelical overseas Christians and opened in 2010, and is known to have a number of American faculty members. Pupils are generally children from the North's elite.

Also known as Tony Kim, he was arrested in April 2017 at the capital's main airport as he tried to leave the country after teaching for several weeks, also at PUST.

Kim is a former professor at Yanbian University of Science and Technology in China, close to the Korean border. Its website lists his speciality as accounting.

South Korea's Yonhap news agency has reported Kim is in his late 50s and said he had been involved in relief activities for children in rural parts of North Korea. It cited a source who described him as a "religiously devoted man".

In a Facebook post, Kim Sang Duk's son said since his arrest his family has had no contact with him. His family said Kim will soon become a grandfather.

A South Korea-born American businessman aged in his 60s, he was sentenced to 10 years' hard labour after being arrested on charges of subversion and espionage in April 2016.

He was arrested in October 2015, after he reportedly received a USB stick containing nuclear-linked data and other military information from a former North Korean soldier.

In an interview with CNN in January 2016, Kim said he was a naturalised American living in Fairfax, Virginia. He said he once ran a trading and hotel services company in Rason, a special economic zone near the North's border with China and Russia.

A month before his trial, Kim had also appeared at a government-arranged news conference and apologised for attempting to steal military secrets in collusion with South Korea. The South Korean spy agency has denied involvement.