HONG KONG (BLOOMBERG) - US President Donald Trump's surprise trade truce with the European Union has analysts asking, "What does this mean for the trade war with China?"

So far there are two very different answers.

One camp sees the deal between Mr Trump and European Commission President Jean-Claude Juncker to suspend new tariffs while negotiating over trade as a deliberate attempt to mend fences with allies as the United States girds for a protracted dispute with China.

"De-escalating the US-EU trade track, and possibly the Nafta trade track in the period ahead, does not mean the US-China trade track is also ripe for an off-ramp," Mr Krishna Guha, vice-chairman at Evercore ISI, wrote in a note.

"This is possible, but it is at least as likely that the US is reducing trade tension with its allies in order to improve its leverage and staying power in what we continue to fear will be a prolonged trial of strength with Beijing."

Mr Guha said Evercore ISI's base case is there will be no US-China deal before 2019.

The US truce with Europe is likely to embolden Mr Trump to increase his pressure on China, said senior economist Chua Hak Bin at Maybank Kim Eng Research in Singapore.

"Trump will likely blow his trumpet and argue that his trade war threats are working," Dr Chua said. "The probability of a full-blown US-China trade war has ironically increased with the US-EU trade deal." 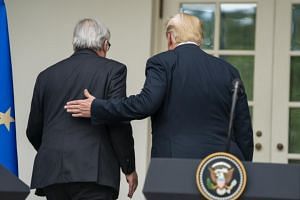 Has US-EU trade war been averted? Not yet, but new deal puts brakes on escalating tension 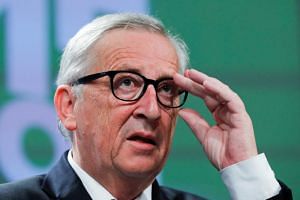 A summary of US President Donald Trump's many trade wars

The other view: Mr Trump's apparent deal with Europe shows how bargains can be struck.

"The willingness of Trump to agree to a trade truce with the EU is a positive sign that a similar arrangement could be reached during a discussion with (Chinese President) Xi Jinping," said Mr Andy Rothman, a former US diplomat in Beijing who is now an investment strategist at Matthews Asia, a money manager.

"I also think that Xi is better placed to make more concessions than Juncker was able to offer, and thus obtain more concrete results from Trump."

That is because of Mr Xi's position as the sole leader of his country and his pledge to make China's economy increasingly market-oriented, said Mr Rothman.

One thing all analysts can probably agree on: do not count your trade truce chickens just yet.

"We should be cautious," said Ms Deborah Elms, executive director of the Asian Trade Centre, a consulting firm in Singapore. "The EU got promises to start talking. China also received similar treatment. After two dialogue sessions, China ended up facing US$50 billion (S$68 billion) in tariffs with potentially more on the way."

Mr Trump has already imposed 25 per cent tariffs on US$34 billion of imported Chinese goods - triggering retaliation from Beijing - with another US$16 billion likely to be targeted soon.

At the same time, the Office of US Trade Representative has identified an additional US$200 billion of Chinese goods slated for a 10 per cent duty and Mr Trump has threatened to target as much as US$500 billion worth - roughly the value of China's annual goods exports to the United States.

While there appears to be little sign of negotiation between the US and China, the situation remains fluid.

Mr Trump has surprised before by pushing ahead with tariffs even after Treasury Secretary Steven Mnuchin in May declared that the trade war was "on hold".

While Chinese officials remain open to a deal, they are unsure about trusting their American counterparts, Bloomberg News has reported.