HONG KONG (BLOOMBERG) - While the world has focused on Hong Kong over the past week, most of the 1.4 billion people right across the border in China have not.

As hundreds of thousands of protesters march in Hong Kong's streets against the unpopular China-backed extradition legislation, another battle is unfolding across Beijing's Great Firewall.

Photos and information about the biggest protests since the handover of the former British colony are being systematically wiped from China's internet. Meanwhile, Chinese state media is pushing a narrative blaming the protest movement on US interference.

On Weibo, China's Twitter-like social media platform, posts voicing support for Hong Kong protesters have been removed since the demonstrations kicked off last weekend - leaving mostly Chinese media editorials on hostile foreign players trying to meddle in Chinese affairs. While WeChat users outside the mainland could share photos and comments about the protests on the popular messaging app, their contacts within the Firewall of China generally failed to see the posts.

Typing "Hong Kong" into China's largest search engine, Baidu, fails to produce news on protests that brought hundreds of thousands of people onto the streets. Censors have even taken note of the songs sung by demonstrators: "Do you Hear The People Sing," a protest anthem from the musical "Les Miserables," has been wiped from Tencent's QQ Music streaming service.

The terms "Hong Kong," "in extradition" and "protests" are among the most-searched terms on Freeweibo.com, a site monitoring posts that have been deleted from the site.

Baidu declined to comment in an emailed statement. Representatives for Tencent and Weibo didn't immediately respond to emailed requests for comment. 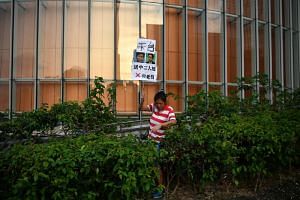 The English-language China Daily reported on Monday (June 17) that Hong Kong parents took to the streets on Sunday in order to urge US politicians against interference in the city's extradition amendments - raising the eyebrows of China watchers after posting the story to its official Twitter account.

The nationalistic Global Times has run commentaries accusing the US of interference. On Monday, it went further, connecting a week of protest in the city with ongoing trade negotiations between America and China - a step China's government had avoided through the week.

If Washington thinks "playing the 'Hong Kong card' can force China to make compromises in trade negotiations with the US, it had better think twice," the paper warned. "The riots in Hong Kong will only consolidate Beijing's tough stance against Washington."

China's Communist Party tightly controls the flow of information into its public sphere. As its media diverts attention to the trade war and warnings of sabotage by outside forces, mainland readers are largely oblivious to the aims of the mass protests - the withdrawal of contentious legislation that would, for the first time, allow extradition to China.

"The reports are mostly intended for domestic readers," said Cheung Siu Wai, a senior lecturer at Hong Kong Baptist University. "It's impossible to completely to censor all information, so they still need an official interpretation of the events for Chinese readers."

Chinese authorities haven't shied away from protesting recent US action in support of Hong Kong's autonomy. In response to American lawmakers' push to reintroduce the The Hong Kong Human Rights and Democracy Act, Chinese Vice Foreign Minister Le Yucheng summoned Robert W. Forden, Deputy Chief of Mission at the US Embassy in Beijing, to lodge a complaint over the US's "irresponsible" comments regarding the extradition Bill.