SEOUL (THE KOREA HERALD/ASIA NEWS NETWORK) - The South Korean children's song Baby Shark made history as part of the Korean Wave, or "hallyu", by charting on Billboard's most competitive Hot 100 list as the first non-pop Korean song.

For the week of Feb 2, Baby Shark came in 36th place on the Hot 100, stepping up one notch from a week earlier.

It was the fourth week in a row that the simple viral song remained on the main Billboard song chart after debuting at 32nd in the second week of January.

It was a feat comparable to those by the most famous K-pop artists such as Psy, Wonder Girls and BTS, whose latest song Idol ranked as high as 11th.

After its release in 2015 by Pinkfong, a children's education entertainment brand by education start-up SmartStudy, the rhythmic two-minute song went viral in cyberspace and on the small screen at home and abroad.

It created a torrent of YouTube parodies among celebrities ranging from popular K-pop girl band Red Velvet to American comedian Ellen DeGeneres, the host of The Ellen Show, as well as ordinary YouTube viewers, a phenomenon on a par with sensational K-pop music.

The official English version of the song had accumulated more than 2.27 billion YouTube views as of Feb 1, while still rapidly gathering more views every day.

At home, however, the children's song has faced a couple of legal battles.

The main opposition Liberty Korea Party unilaterally used the song while it campaigned for the 2018 regional election. 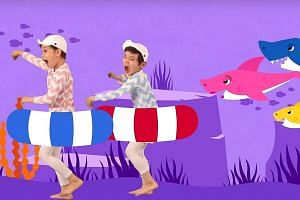 The party said SmartCity's accusation amounts to an obstruction of its legal election campaigning activities, saying the party had prior consent from Johnny Only to use the song.

Several months later, in October, the American composer himself filed a claim for damages with a South Korean court, demanding the chief of SmartStudy pay 5 million won (S$6,032) in compensation for copying his 2011 song.

SmartStudy rejected the plagiarism claim, saying its song was a recreation of a traditional children's song that has no valid copyrights.

The first court hearing was initially scheduled for Jan 31, but Johnny Only's side reportedly dropped the lawsuit. But the American side is reportedly planning to file a civil suit again to demand compensation of a bigger sum.

The famous SmartStudy Baby Shark features the rhythmic introduction of a shark family and their underwater hunt for small fish.

The video of the English-language version of the song comes with matching dance choreography and the addictive refrain of "Doo doo doo doo doo doo".

The same song previously was ranked on Britain's Official Singles Chart in August, having been picked as one of the most-viewed YouTube videos last year.