A teenage Taiwanese K-pop singer has apologised for holding up a Taiwanese flag, and stated that she is a "Chinese national", in a video clip that many here believe was recorded under duress.

It has infuriated many Taiwanese on the day when they are voting for their president and Parliament - and could have an impact even greater than the 2004 assassination attempt on former president Chen Shui-bian when he was campaigning the day before the elections.

It is believed that shock at the shooting and sympathy for the Democratic Progressive Party (DPP) candidate eventually helped tip the vote in favour of Mr Chen.

This time, anger at Chou Tzu-yu's "forced" apology could further propel voters into the arms of the DPP's Ms Tsai Ing-wen and her party's legislative candidates. 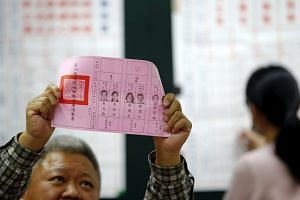 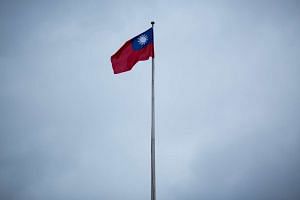 The DPP advocates keeping China at arm's length, in comparison with the Kuomintang's (KMT) Beijing-friendly stance.

Recognising the traction that this incident has, the presidential candidates have quickly lined up behind Ms Chou.

"We all feel a lot of heart pain - a ROC citizen holding her national flag should not be repressed from doing so. This has severely hurt the feelings of the Taiwanese people," said presidential front runner Tsai-Ing Wen from the DPP, speaking after casting her vote in the polls on Saturday (Jan 16) morning.

Taiwan President Ma Ying-jeou on Saturday (Jan 16) morning said that she had no need to apologise.

"She had done nothing wrong but was forced to apologise. I want to tell Ms Chou she has no need to do so, we support her."

In Beijing, China’s Taiwan Affairs Office shot back that the spat was being “used” by certain political forces in Taiwan to“stir up the feelings of people on both sides of the Taiwan Strait”.

“Compatriots on both sides should be on high alert over this,” it said, in a statement carried by Chinese state media.

The 16-year-old, the youngest member of South Korean management company JYP Entertainment's girl group Twice, had waved a flag of the Republic of China - the formal name for Taiwan - during a recent online broadcast, alongside her fellow group members who are South Korean.

Late Friday night, Chou released a video clip. In the 1.5 minute-long video, she stood against a wall, donning a black turtleneck top and sombrely read out an apology from a prepared statement.

Bowing twice, she said: "There is only one China. Both sides of the Taiwan Strait belong to the same entity. I have always thought of myself as a Chinese, and I am proud of it."

Her behaviour, she added, had harmed her company and cross-Strait relations.

"I am very very sorry about it."

The incident had gone viral, attracting over two million views.

The Taiwanese have condemned what they said was "the bullying of a young girl".

Facebook user Johnny Lin said: "All the hard work that Eric Chu had done to campaign can't stop the impact of this 'I am a zhongguoren (Chinese national)' bullet."

"She is just holding the flag in a tv show. Why must she be forced to apologise and deny where she comes from? It's quite ridiculous, we cannot be bullied this way," said entrepreneur Joan Hsieh, 32.

"This is blown out of proportion. She is just a 16-year-old in showbiz but has to be dragged into this sort of politics about our relationship with China. Are we supposed to be scared to even hold our flag and have to lie about our nationality? It's a slap on our face," shipping executive Chen Syuan, 22, said.

Political scientist Tao Yi-feng of the National Taiwan University told The Straits Times that like the assassination attempt in 2004, this incident has a strong emotional impact on the Taiwanese. It will result in a higher voter turnout today. he predicted.

"People who otherwise won’t vote will rush home to vote. The DPP will be the biggest winner."

Even more significant is the effect on the so-called 1992 Consensus, which recognises that there is one China but with differing interpretations.

China has insisted that this is the basis for cross-Strait relations. This is endorsed by the KMT but not the DPP.

Says Prof Tao: "The 1992 consensus collapses, although Eric Chu and President Ma are trying to do some damage control."