NANCHANG, China (BLOOMBERG, REUTERS) - China’s top trade negotiator Liu He offered positive signals that talks with the United States are making progress and both sides are working towards a partial trade deal.

“China and the US have made substantial progress in many aspects, and laid an important foundation for a phase one agreement,” the vice-premier said at a technology conference in Nanchang, Jiangxi, on Saturday (Oct 19).

He reiterated that China is “willing to work in concert with the US to address each other’s core concerns on the basis of equality and mutual respect”.

“Stopping the escalation of the trade war benefits China, the US and the whole world. It’s what producers and consumers alike are hoping for,” Mr Liu said.

He said improved relations between  China and the United States benefited the world.

“Growth in Sino-US economic and trade cooperation is connected to peace, stability and prosperity of the whole world,” he said.

“China and the US can meet each other half way, based on equality and mutual respect, addressing each other’s core concerns, striving to create a good environment and achieving both sides’ common goals.”

The comments come as the US and China work towards getting some sort of agreement ready for presidents Donald Trump and Xi Jinping to sign at the Asia-Pacific Economic Cooperation summit next month in Chile.

On Friday, US President Donald Trump said he thinks a trade deal between the US and China will be signed by the time the Asia-Pacific Economic Cooperation meetings take place in Chile on Nov 16 and 17. 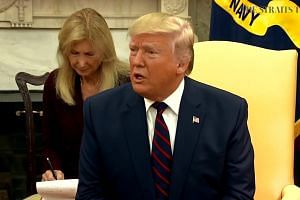 "I think it will get signed quite easily, hopefully by the summit in Chile, where President Xi and I will both be," Mr Trump told reporters at the White House, without providing details.

The US has said China will buy as much as US$50 billion  (S$68 billion) in US agricultural goods in exchange for the suspension of additional tariffs, though Bloomberg has reported that the Chinese want more talks and would need existing tariffs rolled back in order to reach that amount of imports.

The “phase one” deal described by Washington may not address many of the larger issues that initiated the trade war which has dragged on for more than a year, such as forced technology transfers and industrial subsidies.

The White House is also looking at rolling out a previously agreed currency pact with China, people familiar said earlier.

The agreement would be similar to commitments China has already made in accordance with International Monetary Fund standards, they said.

Mr Liu did not address any specifics in his speech, though he reiterated that China would boost intellectual property protection, especially for small and medium-sized enterprises.

US Treasury Secretary Steven Mnuchin said that lower-level talks would take place by phone this week.

US and China reach interim deal to stem economic slide

Chinese officials are working on the text of an agreement on trade in close contact with US negotiators, and have begun discussions on the next stage, Ministry of Commerce spokesman Gao Feng said on Thursday.

China’s economic growth slowed further to 6 per cent in the third quarter, according to data released on Friday, increasing pressure on Beijing to put an end to the trade conflict.

With a drop-off in exports to the US expected to continue as long as tariffs remain, the economy is likely to keep struggling as deflationary pressures hit company profits.  China is targeting 6 to 6.5 per cent gross domestic product growth this year.

Mr Liu said the fundamentals of China’s economy remain unchanged, even as it goes through a significant rebalancing, and the nation is “confident” of reaching its economic targets.