WASHINGTON (AFP) - The United States pressed Russia on Monday (Feb 26) to use its "influence" to secure an "immediate" full-fledged halt to a bloody offensive in Syria's rebel-held enclave of eastern Ghouta.

"The Syrian regime, and its Russian and Iranian backers, continue to attack east Ghouta, a densely populated suburb of Damascus, despite the ceasefire called for by the United Nations Security Council," State Department spokeswoman Heather Nauert tweeted.

"The regime claims it is fighting terrorists, but is instead terrorising hundreds of thousands of civilians with airstrikes, artillery, rockets, and a looming ground attack. The regime's use of chlorine gas as a weapon only intensifies the misery of the civilian population.

"#Russia has the influence to stop these operations if it chooses to live up to its obligations under the #UNSC ceasefire," she added, referring to a Security Council resolution for a 30-day truce that has been a dead letter since it was passed on Saturday.

"The United States calls for an immediate end to offensive operations and urgent access for humanitarian workers to treat the wounded and deliver badly needed humanitarian aid."

The United Nations, France and Germany had made pressing appeals for Russian President Vladimir Putin to demand its Damascus ally enforce a ceasefire, including in Eastern Ghouta where more than 500 civilians were killed last week. 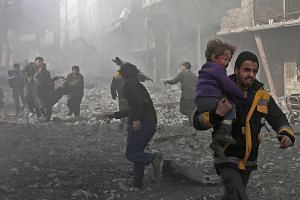 Putin agreed to a five-hour daily window that would allow residents of the battered enclave east of the capital to emerge from their underground shelters.

"On the instructions of the Russian president, with the goal of avoiding civilian casualties in Eastern Ghouta, from Feb 27 from 9:00 to 14:00, there will be a humanitarian pause," said Russian Defence Minister Sergei Shoigu.

According to a statement sent to AFP, he said there should be similar pauses in the southern Al-Tanf border region and Rukban, near the Jordanian border.

Shoigu said "humanitarian corridors" would be opened to allow civilians to leave.

The public would be informed with leaflets and text messages, and buses and ambulances would be waiting at a crossing to evacuate the sick and wounded, Moscow said.

"Forcing civilians to leave or face death under bombardment and siege constitutes a Russian crime," its spokesman Wael Alwan said on Twitter.

UN spokesman Stephane Dujarric said "five hours is better than no hours, but we would like to see an end to all hostilities extended by 30 days, as stipulated by the Security Council." "We will do our best... to deploy our trucks and humanitarian workers in this area," he added.