SEOUL - US and North Korean officials held their fifth working-level talks at the border truce village of Panmunjom on Monday (June 4) to prepare for the historic summit between US President Donald Trump and North Korean leader Kim Jong Un next week.

The two sides met for last-stage negotiations over the agenda for the summit in Singapore, reported Yonhap News Agency.

Sung Kim, US ambassador to the Philippines and former nuclear envoy, is leading the US delegation while the North's team is headed by North Korea's Vice-Foreign Minister Choe Son Hui.

Their previous meetings in Panmunjom, a village in the Demilitarised Zone that runs along the heavily armed border between North and South Korea, were held on May 27, May 30, June 2 and June 3, said Yonhap.

The two sides are expected to focus on narrowing the gaps over how to achieve Pyongyang's complete, verifiable and irreversible denuclearisation, in return for Washington's security guarantee.

The two sides could also discuss the issue of declaring a formal end to the 1950-1953 Korean War, according to Yonhap.

Trump has told reporters that he talked about ending the war during his meeting with senior North Korean official Kim Yong Chol at the White House on Friday. 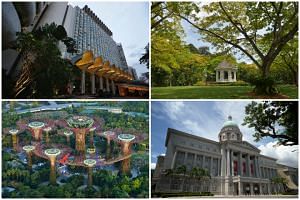 Where will the Trump-Kim summit take place?

Seoul has been pushing for a political declaration to end the war, possibly through a three-way summit among Moon, Trump and Kim in Singapore.

Meanwhile, South Korean Foreign Minister Kang Kyung Wha and US Secretary of State Mike Pompeo spoke on the telephone on Monday to discuss the upcoming summit, according to Seoul's foreign ministry.

They exchanged opinions over the summit preparations, including the recent visit by Kim Yong Chol to the US.

The two sides agreed to work together to explore ways to achieve complete denuclearisation and lasting peace on the Korean peninsula, said Yonhap.