WASHINGTON (REUTERS) - The United States sent a Navy ship through the Taiwan Strait on Friday (Aug 23), rekindling one of a growing number of flashpoints in Washington's relationship with Beijing.

The US military has increased the frequency of its transport movements through the strategic waterway in the face of opposition from China.

Friday's voyage risks further raising bilateral tensions stoked by a bitter trade war, but will likely be viewed by Taiwan as a sign of support from the administration of President Donald Trump.

This month, China denounced arms sales from the US to Taiwan, and in July said it was ready for war if there was any move by Taiwan towards independence.

Beijing has been ramping up pressure to assert its sovereignty over the island, which it considers a wayward province.

Commander Reann Mommsen, a spokesman for the US Navy's Seventh Fleet, said the ship's transit through the Strait - a 180 km-wide waterway separating Taiwan from China - "demonstrates the US commitment to a free and open Indo-Pacific".

Mommsen identified the vessel as the Green Bay, an amphibious transport dock ship.

Taiwan's Defence Ministry said in a statement that the island's military had a full grasp of the situation in the Strait and closely monitored it. It made no direct mention of the US ship. 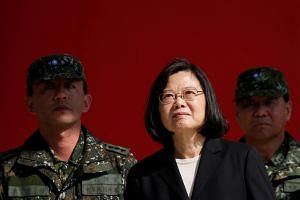 Washington has no formal ties with Taiwan, but is bound by law to help defend the island and is its main source of arms.

The US this month approved a possible US$8 billion (S$11 billion) sale of F-16 fighter jets to Taiwan, which recently unveiled its largest defence spending increase in more than a decade.

The Green Bay's transit also takes place against the backdrop of demonstrations in Hong Kong against a perceived erosion of freedoms in the former British colony that returned to Chinese rule in 1997.

Beijing has slammed the protests and has accused foreign countries, including the US, of fomenting unrest.