BEIJING (Reuters) - The United States is a troublemaker and has no right to lecture China about taking responsibility for reining in North Korea as tensions on the peninsula are a direct result of US actions, the official People's Daily newspaper said on Wednesday (Sept 14).

While China has been angered by North Korea's fifth and largest nuclear test to date last week, it has also blamed the United States for taking what Beijing sees as equally provocative behaviour, like a decision to base the Terminal High Altitude Area Defence (Thaad) anti-missile in South Korea.

China is North Korea's most important diplomatic and trade partner, and while China has signed up for tough United Nations sanctions on the isolated state, it refuses to cut the country off completely, fearing it may collapse.

The US says it wants China to do more, with US Defence Secretary Ash Carter last week singling out the role he said China should play.

In a commentary, the ruling Communist Party's official paper said the US was pretending it had nothing to do with the North Korea issue and was putting the blame on others. 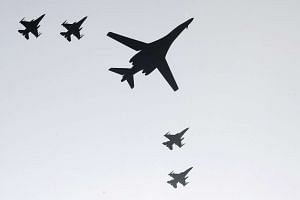 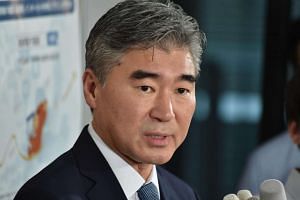 "People have reason to doubt whether Washington is willing to make the effort to push the North Korea issue in the direction of a resolution," the paper said.

"At the start of the year after North Korea carried out its fourth nuclear test, the United States did not hesitate to increase irritations to the peninsula's security situation, did not hesitate to harm regional countries strategic security interests, strongly pushing Thaad's deployment in South Korea,"it said.

The US is doing less and less for the public good in international affairs, "but its vigour for troublemaking has not diminished an iota", the newspaper said in the commentary, published under the pen name "Zhong Sheng", meaning "Voice of China", often used to give views on foreign policy.

North Korea is an example of this, as are Washington's"brazen" efforts to provoke problems in the South China Sea by claiming to be a "protector of the rules," the paper added.

China has been infuriated by "freedom of navigation" patrols conducted by the US in the South China Sea, where China is locked in disputes with several South-east Asian nations.

The US is an "enormous obstacle" to a resolution of the North Korea nuclear issue, the paper said.

"The United States needs to seriously look back at how things have developed with the nuclear issue on the Korean peninsula, and really think about an effective resolution method and assume its responsibilities."