WASHINGTON - President Donald Trump is ready to end the Korean War, said special envoy Stephen Biegun on Thursday (Jan 31), in a signal that a formal end to the decades-long conflict could be on the cards ahead of a second summit between Mr Trump and North Korean leader Kim Jong Un planned for this month.

This complex of sites represented the “totality” of North Korea’s plutonium reprocessing and uranium enrichment programs and went beyond the now-inactive Yongbyon nuclear facility which Mr Kim already pledged to give up if the US would take corresponding actions, he said.

A declaration to end the Korean War has been a long-held wish of both North and South Korea, but the US has thus far been reluctant to agree to even a symbolic statement over concerns it could lead to calls for the US to withdraw its 28,500 troops stationed in South Korea.

“I am absolutely convinced, and more importantly, the President of the United States is convinced that it’s time to move past 70 years of war and hostility on the Korean Peninsula. There is no reason for this conflict to persist any longer,” said Mr Biegun in his first public speech since being appointed the US’ point man on North Korea in August last year. 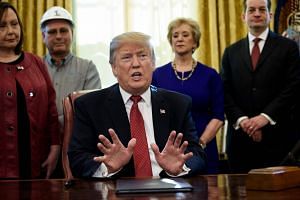 Trump says time, location for summit with North Korea's Kim has been set

Trump slams US intelligence chiefs as ‘passive and naive’ on Iran

North Korea says it wants peace, relations with US

Mr Trump said on Thursday that his second summit with Mr Kim scheduled at the end of February was “moving along well” and that he would announce more details next week, likely during his State of the Union address on Tuesday.

Mr Pompeo said on Wednesday that North Korea had agreed that the summit would be "some place in Asia".

Mr Biegun himself will travel to Seoul on Sunday to meet his South Korean counterpart Lee Dohoon.

He will also have follow-up meetings with his North Korean counterpart Kim Hyok Chol to discuss the next steps to advance America’s objective of the final fully verified denuclearisation of North Korea, and to make further progress on all the commitments the two leaders made at the Singapore Summit in June last year, the State Department said in a statement on Thursday.

Progress on denuclearisation has somewhat stalled since the summit. North Koreans said the US should reciprocate their good-faith dismantling of the Punggye-ri nuclear test site and ending of their nuclear missile tests by lifting the punishing sanctions they are under, while Washington’s stance was that sanctions will not be lifted before Pyongyang achieves complete, verifiable, irreversible denuclearisation.

Mr Biegun’s news that Pyongyang had promised to get rid of its plutonium and uranium enrichment programme was greeted with some scepticism in the light of the US intelligence community’s annual assessment on worldwide threats, released earlier this week, that North Korea was unlikely to give up all of its WMD stockpiles, delivery systems, and production capabilities.

When questioned by former diplomat and seasoned Korea scholar Ben Carlin, who took part in US-North Korea negotiations from 1992 to 2000, Mr Biegun did not contradict the intelligence assessment but said it was “divorced from policy”.

“North Korea has given us little indication that they have yet made the decision to completely dismantle and destroy that capability. We all know that,” said Mr Biegun.

“Therefore, ‘what’ is the question, and what President Trump has done is directed the Secretary of State to engage diplomatically through a combination of pressure and incentives to see if we can invite North Korea to make a different set of choices. That’s the complete picture,” he added.

In his speech, Mr Biegun appealed to the impoverished North Korea with promises of economic prosperity as he sought to show a way out of the diplomatic impasse.

“At the appropriate time, with the completion of denuclearisation, we are prepared to explore with North Korea and many other countries the best way to mobilise investment, improve infrastructure, enhance food security, and drive a level of economic engagement that will allow the North Korean people to fully share in the rich future of their Asian neighbours,” he said.

He signalled that the US could be willing to step back from earlier demands that denuclearisation had to come before all else, saying: “If we do not address the weapons of mass destruction issue on the Korean Peninsula today, we will have an Asia-Pacific nuclear weapons challenge tomorrow… But in relative terms, we’re also not demanding that this be the starting point.

“In parallel, we’re willing to look at a lot of other things that we can do together that also build the confidence and reduce the sense of risk or threat that would potentially drive a country to want to sustain that kind of capacity,” he added.

Mr Biegun also said that before the process of denuclearisation could be final, the US must have a complete understanding of the full extent of the North Korean nuclear missile programmes, but hinted this did not need to come right away.

“We will get that at some point through a comprehensive declaration,” he said.

Former State Department official Mintaro Oba told The Straits Times: “It's certainly a step forward for a US official to directly state that the United States won't invade North Korea, and that it wants to end the Korean War.  I can't recall any previous instance where that has happened.”

Public comments like these help send the right signals to the North Koreans that the United States is serious about the diplomatic process, added Mr Oba, who worked on North Korea policy.

But Mr Biegun's comments about a comprehensive nuclear and missile declaration suggests little has changed substantively in America’s position, he said.

“If Washington's main goal is denuclearisation, it will have to be much more flexible to make any progress with North Korea, which highly values its nuclear program and is unlikely to document and reveal everything it has, especially without major US concessions,” he said.

These concessions could include the lifting of sanctions, which would have to be a part of any ambitious and comprehensive deal with North Korea, and security guarantees and progress towards the normalisation of relations, he added.