SEOUL - The United States does not want to talk to North Korea if Pyongyang is using it to buy time for further development of its nuclear and missile programmes, Yonhap news agency reported on Wednesday (Feb 28).

Instead, North Korea should show that it is willing to use any opportunity for dialogue to make progress in its denuclearisation, Yonhap said, quoting Mr Marc Knapper, the US acting ambassador in South Korea.

Mr Knapper, the charge d'affaires at the US Embassy in Seoul, made those points during a meeting with reporters.

His remarks came at a time when North Korea said that it is willing to talk with the US.

The US Department of State had said that it will hold talks with North Korea only when it is ready to discuss its denuclearisation, Yonhap reported.

Mr Knapper said that Mr Yun's planned retirement does not signify any change in Washington's North Korea policy going forward, according to Yonhap.

Mr Yun, 63, is retiring as special representative for North Korea policy and deputy assistant secretary for Korea and Japan after more than three decades of service. 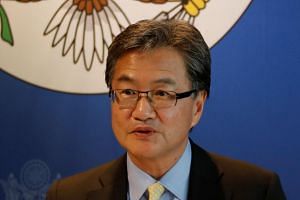 Confirming his retirement, Mr Yun told The Washington Post: "This is my own personal decision. Secretary (Rex) Tillerson has told me he appreciates my service and did not want me to go, but he accepts it reluctantly."

Mr Yun is known for leaning towards dialogue with North Korea to resolve the current nuclear stalemate. according to Yonhap. His departure has sparked talk that Washington might be adjusting its North Korea policy.

On Wednesday, Mr Knapper said he is aware of such concerns being raised in South Korea and other countries. But he stressed that the concerns were far from the truth, Yonhap reported.

Washington's North Korea policy will remain unchanged, he said, adding that US cooperation with South Korea will also stay firm.