SEOUL (AFP) - Three Americans detained in North Korea may have been moved ahead of a possible release to coincide with a summit between North Korean leader Kim Jong Un and US President Donald Trump, sources told AFP on Wednesday (May 2).

The United States has been demanding the North free Kim Hak Song, Kim Sang Duk and Kim Dong Chul and reports have said the two sides were close to reaching a deal on their release.

"They are staying in a hotel on the outskirts of Pyongyang," said Choi Sung Ryong, a South Korean activist with contacts in the North.

The three detainees are being kept separately, Choi said, but were "going on tours, receiving medical treatment and eating good food".

Diplomatic sources in Pyongyang said there were rumours that the three had been relocated, but there had been no confirmation of their exact whereabouts.

The release of the three men was discussed when US Secretary of State Mike Pompeo travelled to Pyongyang last month, according to the Wall Street Journal.

Trump had also stressed that their return remained a priority and that his administration was "fighting very diligently to get the three Americans back". 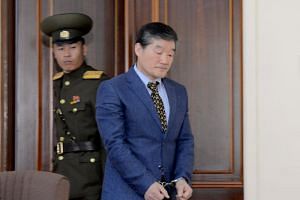 "We have been talking about them. We are negotiating now," Trump said at a joint press conference with Japanese Prime Minister Shinzo Abe.

Kim Dong Chul, a South Korea-born American pastor, has been detained in the North since 2015 when he was arrested for spying. He was sentenced to 10 years' hard labour in 2016.

Kim Hak Song and Kim Sang Duk - or Tony Kim - were both working at the Pyongyang University of Science and Technology, founded by evangelical Christians from overseas, when they were detained last year on suspicion of "hostile acts".

CNN had said the prisoners' release was also discussed at three-day talks in Stockholm between the North's Foreign Minister Ri Yong Ho and Swedish counterpart Margot Wallstrom in March.