SEOUL (BLOOMBERG) - TVs bearing labels like Hisense or TCL have long been the go-to for bargain-hunters scouring Best Buy for deals. That may change real soon.

Nestled among the thousands of knick-knacks, paraphernalia and foodstuffs Donald Trump's targeting in his next salvo of punitive tariffs are a plethora of components and gear essential to televisions and displays - including the cubic cathode-ray-tube contraptions familiar only to viewers of yesteryear.

Those additional levies will inflate the cost of Chinese-made brands from TCL Electronics Holdings Ltd. to Hisense Electric Co., as well as suppliers from BOE Technology Group Co. to Tianma Microelectronics Co.

All were down more than 3 per cent in Asian trade.

The Trump administration on Tuesday pushed ahead with plans to impose tariffs on US$200 billion more of Chinese goods, escalating a trade war that may soon hurt American consumers.

While those so far omit big-ticket items such as the mobile phones Apple Inc. assembles in the world's No. 2 economy, the assault on TVs hits closer to home. Depending on the scope of the tariffs, even South Korean rival Samsung Electronics Co., which has a large production base in China, could be forced to consider a shift. 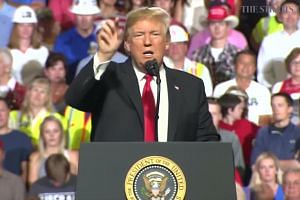 "And in the near future, there may be some South Korean technology industries that benefit. But long-term implications can catch up with South Korean companies as well while the US probably won't be able to put a lid on cheap Chinese imports for good."

The surprise hit comes just as TV makers prepared to stock up on panels ahead of the make-or-break holiday shopping season. After years of grappling with over-capacity and the resultant margin corrosion, South Korean TV makers had been expected to stock up on 18 per cent more display panels in the third quarter, according to IHS Markit.

But the tariffs may partly negate Chinese brands' price-undercutting strategy - particularly if inventories remain high. Even before Trump's latest salvo, the declining yuan had been exerting upward pressure on component costs.

"TV demand in Europe has particularly been weaker than expected, and the depreciation of local currencies in the emerging markets against the US dollar has led to a higher price tag in local currencies," Deborah Yang, director of display supply chain at IHS Markit, wrote before the tariffs were announced.