It's a good time to work in the fake-handbag business.

The shadow industry - already a big moneymaker - stands to reap another potential windfall from the trade war, which escalated this week.

Knockoffs of famous brands - Coach, Kate Spade and others - are mostly made in China and arrive at US shores through clandestine channels built to dodge authorities. The authentic purses and their components, also made in China, are shipped through official routes and would face Trump's proposed new duties of 10 per cent effective next Monday.

This all stacks up in favour of the counterfeit labels at every step of their illicit journey: from factory floors in China to street vendors in cities worldwide.

Shoppers come to Lulu's cramped stall in Beijing's seven-floor Silk Market to get replicas of Coach bags at half-price - cheaper for seasoned barterers.

The 32-year-old copycat merchant, who agreed to an interview using only her nickname to stay under the radar, said the goods come from a site in the southern province of Guangdong.

"No middleman" and no taxes, she said.

If prices for brand-name bags swell on international markets because of tariffs, Lulu predicts it can only be good for Chinese knockoffs. "More people will think: 'Why not just buy a bag here?' " she said.

The next wave of tariffs target another US$200 billion in Chinese imports, including handbags, leather and silk.

"A tariff on a genuine bag is a subsidy for a fake," said Susan Scafidi, a New York fashion lawyer focused on intellectual property.

The global counterfeit trade for all items, from purses to electronics to software, is worth US$461 billion, according to the latest estimate by the Organisation for Economic Cooperation and Development. That is more than the global drug trade.

And more than 85 per cent of the handbag replicas originate in mainland China and Hong Kong. A fifth of counterfeit busts worldwide involve American brands.

Middle-income shoppers are particularly vulnerable to cost increases, analysts warn, and could swing to the faux side for their splurges at a time when finding Chinese fakes on the Internet has never been easier.

The tags on Lulu's purses in Beijing say 1,280 yuan, or about US$186. She gets a cut of the sales but would not say how much. Another merchant, who declined to provide her name, told The Washington Post that she earns between US$730 and US$1,200 per month, depending on the appetite for knockoffs.

That's good money in a country where workers on average earn US$8,250 annually, according to World Bank data.

Most customers won't spend more than US$150 on a knockoff purse, Lulu said.

That includes Lauren Everett, a 29-year-old flight attendant from London, who visited the Silk Market on a recent afternoon to browse the deals.

Normally, she wouldn't seek out fakes, but if someone there is hawking a near-identical copy of a French tote she likes, and it's cheaper than the US$125 version in stores, "you may as well," she said.

She testified to the US trade representative in a written statement that Trump's tariffs would hurt her namesake brand, known for bags with cross-body straps that start at about US$150. 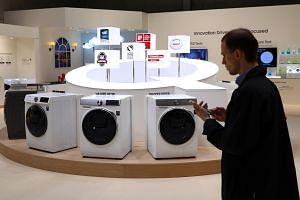 New duties on handbags, Minkoff wrote, "will only ennoble the bad actors in the Chinese economy who pose a genuine threat to our business via bad faith registrations of our recognized trademarks."

Soaring prices are inevitable if businesses have to absorb higher border taxes in the widening trade battle, said Brent Cleaveland, executive director of the Fashion Jewellery and Accessories Trade Association, which represents 225 US companies.

Warnings from industry groups came weeks after authorities made their largest seizure of fakes at the Port of Newark.

In late August, the federal government announced that it had confiscated enough knockoffs from China imitating Coach, Michael Kors and Tory Burch, among other fashion brands, to stuff 22 shipping containers. Authorities estimated that the load represented a loss to US companies of nearly US$500,000.

Beijing has pledged over the years to crack down on the fakers, slamming online retail giants such as Alibaba for failing to eradicate replicas on its platforms.

Officials also routinely inspect brick-and-mortar stores. But, as the economist Yao points out in his research, they may not take the job too seriously because local vendors rely on the income. Often, he wrote, sellers seem to know precisely when to hide their merchandise.

Such appeared to be the case this month at Beijing's Pearl Market, another counterfeit hot spot.

As hundreds of African delegates visited the capital city in September for an economic summit, merchants told The Post that security had tightened so they did not have their goods on display.

Instead, they led buyers to unmarked apartments down a nearby alley and showed them closets full of knockoff Gucci, Prada, Michael Kors and Louis Vuitton handbags - also from Guangdong, the manufacturing hotbed in the south.

Merchants encouraged foreign customers to share their social media usernames with friends back home. They were happy to take international orders.