CHENGDU (CHINA DAILY/ASIA NEWS NETWORK) - A pair of panda twins that returned from the US is catching up with local dialects as well as adapting to local delicacies in their new home in south-west China's Sichuan province.

Mei Lun and Mei Huan, the first surviving pair of giant panda twins born in the US, started a 30-day quarantine when they landed at the Chengdu Research Base of Giant Panda Breeding on Nov 5.

The female twins could only respond with a confused look when hearing their names called out in the Sichuan dialect, but are still trying to fathom the words like "have you eaten up" and "did you have a good time" in local Sichuan dialect, according to Mr Luo Yunhong, the pandas' breeder.

On the contrary, they would give an immediate response to English orders like "come here", Mr Luo added.

Like the preference for language, the pandas prefer "Western fast food" instead of local food wowotou (a kind of steamed corn bread), according to Mr Luo. "Biscuits are their favourite treats."

During the return trip by air, the pair was accompanied by a considerable amount of panda-particular luggage, including about 375 pounds of bamboo and 25 pounds of favourite treats, including sugarcane and giant panda biscuits.

But Mr Luo said he was trying to decrease their intake of biscuits by adding wowotou day by day. 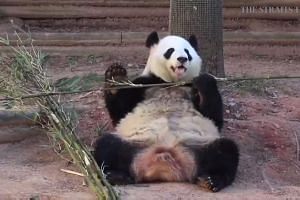 Mei Huan, who has been adapting quicker than her elder sister, has gradually become used to the change of menu, Mr Luo said, even though Mei Lun is just sniffing at the food.

"For returned pandas, this is an essential process," said Mr Liu Zhenwei, staff of the entry-exit inspection and quarantine.

Mr Liu said 90 per cent out of 200 giant pandas have gone abroad or returned overseas from Sichuan province.

The good news is that Mei Lun and Mei Huan's appetite and digestion are improving, judging by the weight of their faeces, which has grown from 7kg to 10kg, although their body weight remains the same, Mr Liu said.

The female pandas are the fourth and fifth offspring of Lun Lun and Yang Yang, who arrived at Atlanta Zoo in 1999 on loan from China. The conditions of the loan included the stipulation that the offspring of the couple will all eventually return to China before turning four to take part in breeding projects.