HONG KONG (BLOOMBERG) - Potentially, the most important meeting in Asia this week isn't on any official summit agenda, features no head of state and certainly doesn't include China.

Senior officials from Australia, India, Japan and the US - a set of countries known as "the Quad" - plan to meet on Thursday (Nov 15) on the sidelines of a regional summit in Singapore.

It will be only the third meeting of the group since its revival last year as a counterweight to China's growing economic and military might.

The resurgence of the Quad - first conceived more than a decade ago during the Bush administration - reflects growing unease over Chinese President Xi Jinping's more assertive foreign policy.

The four countries aim to provide an alternative model to China's authoritarian rule and state-directed lending for infrastructure projects, which has in some cases saddled poorer nations with debt and increased their dependence on Beijing.

Australia sees the Quad as an "important sort of architecture in the region" that can cooperate economically, militarily and strategically, Prime Minister Scott Morrison told reporters on Wednesday.

The Quad's origins date back to the 2004 Boxing Day tsunami that devastated large parts of Asia, after which the four countries joined together to provide humanitarian relief.

Key early advocates included Japanese Prime Minister Shinzo Abe, who had a brief stint as leader more than a decade ago, and then US Vice-President Dick Cheney.

Senior officials from the Quad held their first meeting in 2007, and the four countries participated in joint naval exercises. Yet the moves provoked protests from Beijing, and the grouping fell apart particularly after Mr Kevin Rudd - a Mandarin speaker who favoured engagement with China - became Australia's prime minister later that year.

Since then, China has become increasingly assertive, building and militarising artificial structures in the South China Sea, establishing a military base at Djibouti on the route to the Suez Canal, and financing the construction of transport projects across the region.

US allies like Australia have also been stung by allegations of China's attempts influence in their domestic politics.

This time around the Quad is moving along more slowly, with the countries involved careful to convince South-east Asian nations of its merits.

Key to that is emphasising that it's not part of a strategy to contain China - but rather to balance it by promoting a club of democracies that respect the rule of law and have vibrant, private-sector led economic growth. 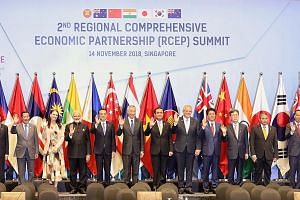 The Quad has yet to be formalised as a ministerial-level meeting amid concern that it would endanger vital economic relations with China. Beijing views the group with suspicion, with Foreign Minister Wang Yi mocking the bloc as a "headline-grabbing idea" that would dissipate "like the sea foam in the Pacific or Indian Ocean".

"The four countries' official position is that it targets no one," Mr Wang said in March. "I hope they mean what they say and their action will match their rhetoric. Nowadays, stoking a new Cold War is out of sync with the times and inciting bloc confrontation will find no market."

One main goal of the Quad is to finance infrastructure projects that are properly planned and financially sustainable - although they don't have nearly as much cash to offer as Mr Xi's Belt-and-Road Initiative, which Morgan Stanley says may total US$1.3 trillion (S$1.79 trillion) by 2027.

That includes projects with price tags that small economies can't handle - particularly in Myanmar and Sri Lanka, where debt payments take up about 80 per cent of national revenues.

Officials from the Quad nations emphasise it's one part of a bigger strategy that can include other countries. Australia, Japan, New Zealand, South Korea and the US, for example, are planning to fund a multi-billion dollar electric-power and Internet infrastructure programme for Papua New Guinea, The Australian newspaper reported on Wednesday, without citing anyone.

The Quad has a future as part of the US's wider strategy to promote a "free and open Indo-Pacific", US National Security Adviser John Bolton told reporters on Tuesday in Singapore.

"This is a strategy that is still being shaped, but it's been received very well, and we'll continue to pursue it," Mr Bolton said. "The level of diplomatic activity has picked up."

Earlier this month, Australia's Morrison unveiled a A$2 billion (S$2 billion) infrastructure fund for the South Pacific, describing the region as "our patch".

Japan agreed with India in May last year to develop series of joint projects along what they have called the "Asia-Africa growth corridor", linking Africa with India and other countries of South-east Asia via sea routes.

Despite the increased push for the Quad, many obstacles remain. It's unclear exactly what it will do, and India in particular has been reluctant to elevate participation above senior bureaucrats.

Prime Minister Narendra Modi has recently focused on mending ties with Mr Xi, and earlier this year, he said India "does not see the Indo-Pacific region as a strategy or as a club of limited members".

"I am concerned that a little too much hope and faith is being placed in a construct that has some fundamentally weak underpinnings," said Dr John Blaxland, head of the Strategic and Defence Studies Centre at Australian National University.

"There's scope for cooperation but it would be false hope to look to the Quad arrangement as a Nato for the eastern end of the Eurasian landmass."