SEOUL (THE KOREA HERALD/ASIA NEWS NETWORK) - When North Korea's late leader Kim Jong Il met with his South Korean counterparts during the previous two summits in 2000 and 2007, the events were shrouded in secrecy as they took place at the reclusive state's capital, Pyongyang.

The upcoming third inter-Korean summit between South Korean President Moon Jae In and North Korean leader Kim Jong Un, however, could be quite different. Not only is the summit to be held on South Korean territory at the truce village of Panmunjeom, the event will be broadcast live and relayed to the public online.

Following a series of preparatory talks with North Korea, presidential office Cheong Wa Dae on Sunday (April 22) announced a plan to have the audience at home and abroad watch the summit through mobile devices in real-time.

"It's like keeping the summit at hand," said Mr Yoon Young Chan, the chief presidential secretary for public relations. "We have come up with an online platform where the people around the world can watch anything related to the summit in real-time."

Mr Yoon also added that the two Koreas will hold a third working-level meeting to discuss security, protocol and press coverage of the inter-Korean summit, which is take place at Peace House, a South Korean facility inside Panmunjeom.

Those measures are expected to give more transparency to the third inter-Korean summit than the previous ones, officials said, amid the expectations that the two Koreas will become more committed to implementing their agreements.

Despite the landmark agreements to ease cross-border tensions and enhance economic ties that followed the two previous summits, the two Koreas have often seen themselves falling short of achieving the goals and even backtracking on their agreements.

"It's a whole different story when the two Koreas' leaders meet face to face and announce a specific statement," said Presidential Chief of Staff Im Jong Seok, who chairs the presidential preparatory committee for the inter-Korean summit, in a press briefing last week.

Following the 2000 summit, Mr Kim Jong Il nd South Korea's former president Kim Dae Jung agreed to establish the Kaesong Industrial Complex. But the symbol of cross-border economic cooperation was shut down during the previous Park Geun Hye administration over concerns that the money generated at the industrial complex was being funnelled into North Korea's military programme.

In 2007, former president Roh Moo Hyun agreed to establish what the two sides called a "peaceful and cooperation zone" on the West Sea to promote the exploitation of marine resources and avoid cross-border skirmishes.

The ambitious plan was never fulfilled as Mr Roh was replaced by another conservative president Lee Myung Bak, who denounced the agreement as giving an excuse for North Korea to raise issue with the de-facto maritime border on the West Sea. 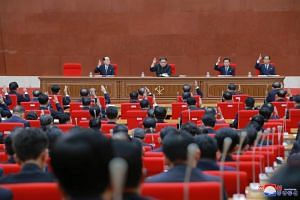 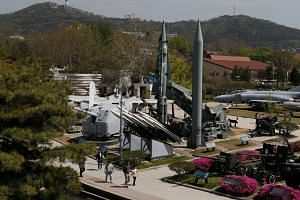 Another major difference this time that is boosting expectations for the Moon-Kim meeting is that the upcoming summit will be followed by the first-ever meeting between the leaders of North Korea and the United States.

Mr Moon has described his meeting with Mr Kim as "a guideline meeting" for the subsequent meeting between Mr Kim and US President Donald Trump, who said the summit would take place in late May or early June.

The Moon administration has asserted that the inter-Korean summit should prompt Pyongyang and Washington to reach the goal of denuclearising North Korea and establishing permanent peace on the Korean Peninsula.

"Holding the US-North Korea summit has historic significance in itself," Mr Moon said last week after being briefed about the preparations for the inter-Korean summit by Cheong Wa Dae officials and Cabinet members.

The previous inter-Korean summits fell short of serving their intended purposes as they were not supported by specific agreements by the US and North Korea, the direct signatories to the Korean War armistice agreement, which South Korea refused to sign.

The first inter-Korea summit in June 2000 could have been followed by a US-North Korea summit during the Clinton administration, but the efforts came to halt after the Democrats lost the presidential election and the Bush administration adopted an assertive stance on Pyongyang, calling North Korea an "axis of evil".

"There were hurdles to implementing the agreement of the previous inter-Korean summits because they did not take place in conjunction with US-North Korea summit," said Mr Im, the Presidential Chief of Staff.

"From the perspective of realpolitik, a major diplomatic breakthrough is difficult to achieve without the consent and patience of the US," Mr Im said.