Mr Guterres said he was encouraged by the advances made to hold the summit and discuss future talks on the denuclearisation of the Korean peninsula.

"The latest developments are further steps forward in laying the foundation for the resumption of sincere dialogue, leading to sustainable peace and denuclearisation on the Korean peninsula," his office said in a statement.

Mr Guterres "is encouraged by the advances made during the latest inter-Korean talks, particularly the agreement to hold a summit meeting soon, to further reduce military tensions, and to discuss denuclearisation in future talks with all relevant parties," it added.

"He stresses the need to protect the momentum and seize the opportunities available to find a peaceful path forward." The leaders of North and South Korea will next month hold a historic summit at the truce village of Panmunjom, said an envoy from the Seoul government following talks in Pyongyang with leader Kim Jong Un.

South Korea's national security adviser, Chung Eui Yong, said Pyongyang was open to discuss getting rid of its nuclear program with the United States in exchange for security guarantees.

Mr Guterres offered UN help to the governments concerned to address the crisis. 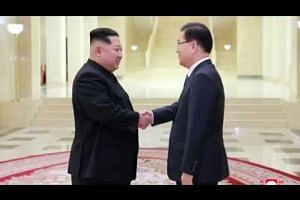 In December, Guterres dispatched his political chief, Jeffrey Feltman, to Pyongyang to urge North Korea to open a dialogue on ending the crisis.

Mr Feltman, however, was then told by Pyongyang that "now was not the time" for dialogue, even if the North Korean officials agreed it was important to avoid war.

The UN Security Council has imposed tough economic sanctions aimed at choking off revenue to Pyongyang's military programmes after Kim's regime carried out a sixth nuclear test and a series of advanced missile launches.

China - Pyongyang's sole ally - and Russia argue that sanctions alone will not push North Korea to change course and have repeatedly called for stepping up diplomatic efforts to achieve a solution.