TOKYO (AFP, Reuters) - A strong typhoon lashed islands in southern Japan Thursday, packing gusts of up to 252 kmph and leaving thousands without power as it headed towards the mainland.

Authorities warned of landslides and high waves as Typhoon Talim battered the southern Okinawan island chain, dumping the most rain seen over a 24-hour period in 50 years on the city of Miyako.

According to Okinawa Electric Power, more than 18,000 homes were without power in Miyako, a city of around 54,000 people some 1,840 km southwest of Tokyo.

Japan’s Meteorological Agency said the typhoon was expected to approach the Kyushu island by early Sunday.

Taiwan is expected to lift a shipping warning later on Thursday (Sept 14) after Typhoon Talim veered away from the island and moved towards Japan but meteorologists warn of heavy rains in the capital, Taipei, and other cities.

Some flight cancellations could also still be expected as northern Taiwan is lashed by heavy rain.

Talim also might not hit the Chinese mainland as it veers towards Japan, the bureau said. 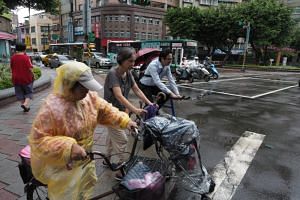 Taiwan battens down for Typhoon Talim, mainland China on alert for twin storms

Talim had been expected to move towards China, where more than 200,000 people in Fujian and Zhejiang provinces have been evacuated, China's official Xinhua news agency said.

China Airlines and EVA Airways, Taiwan's two largest carriers, said they would cancel some international flights later on Thursday due to the storm's proximity.

Typhoons are a seasonal routine for Taiwan, but the island has stepped up preparations since Typhoon Morakat in 2009. Morakat was the deadliest typhoon to hit the island in recorded history, killing close to 700 people, most in landslides.