One of Asia's richest men, the flamboyant tycoon made his riches by smuggling luxury goods into China from Macau during World War II, before he secured the only gaming licence in the then-Portuguese colony in 1962.

He is the great-nephew of one of Asia's first tycoons, Robert Hotung, who was among Hong Kong's wealthiest individuals at the turn of the 20th century.

The 96-year-old Dr Ho first married in 1942, but has subsequently had three other partners, though it is unclear whether or not he married all the women he called "wives".

The keen ballroom dancer cultivated a playboy lifestyle, fathering at least 17 children, one of whom, Lawrence, runs rival casino and hotel operator Melco Crown in Macau.

The billionaire monopolised the gaming industry until 2002, when the government introduced foreign investors, sparking a boom which saw casino takings contribute around 80 per cent of the city's annual revenue.

Among his impressive nicknames are 'The King of Gambling', 'The King of Macau', and Macau's 'underground governor'.

Born Ho Hung Sun, on Nov 25, 1921, Dr Ho's early life was troubled, as his rich and influential father went bankrupt. This put the family in an awkward situation, which was compounded when two of his brothers committed suicide.

He was an academic underachiever initially, but when he realised that an education was his best chance to regain the family fortune, his hard work saw him receive a scholarship to the University of Hong Kong, according to gamblingsites.org.

But the plan to study went awry when the Japanese invaded Hong Kong during World War II, forcing him to flee Macau. 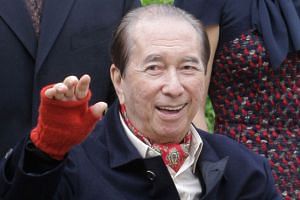 The hardship ignited his entrepreneurial spirit, landing his first job at a Japanese-owned import-export firm. Smuggling luxury items into China helped him amass a small fortune, which he used to launch a construction and kerosene company to kick-start his personal empire.

Along with partners Yip Hon, Teddy Yip, and Hong Kong tycoon Henry Fok, Dr Ho made a pitch to the Portuguese government to enter the lucrative gambling industry in Macau, promising to build up the city's infrastructure and heavily promote tourism.

The pitch worked, and the quartet were awarded the gambling monopoly in the city by the government in 1962. This led to the creation of Sociedade de Turismo e Diversoes de Macau, SARL (STDM), as well as Ho's Shun Tak Holdings, Ltd.

Dr Ho quickly branched out into a number of business ventures, such as hotels, banking, air transport and entertainment. It is said that at the height of his power, he controlled over half of the economy of Macau.

His ambitions extended outside Macau as well, with investments over several decades in Canada, Timor-Leste, Mozambique, Vietnam, Portugal, China, Hong Kong, Indonesia, and the Philippines. At one point, he even managed to get a casino opened in the basement of a North Korean hotel.

Dr Ho has made billions from the gambling industry, but he's also taken great pains to improve the overall quality of Macau. "Fulfilling my obligations to society is such a wonderful source of happiness and satisfaction," he reportedly said.

Dr Ho will step down from his flagship casino empire SJM Holdings on June 12, after which he will take on the new title of “chairman emeritus”, the company said late on Thursday (April 12).