TAIPEI (BLOOMBERG) - Electronics-makers are preparing to shift more production to South-east Asia as trade tensions with the US make it less appealing to manufacture gadgets in China.

A number of Taiwanese firms that form a crucial plank of the global supply chain have in recent days signalled their intention to diversify away from the world's No. 2 economy.

Delta Electronics Inc, which supplies power components to Apple Inc, said on Tuesday (July 31) it's making a US$2.14 billion (S$2.92 billion) offer to buy out a Thai affiliate - a precursor to expanding production there.

Merry Electronics Co, which makes headphones for the likes of Bose, said it may move some of its production to the same country from southern China, depending on how the trade conflict pans out.

Taiwan is home to some of the world's largest contract manufacturers, including iPhone-assembler Foxconn.

Cranking out goods under the labels of well-known brands, an increasing number in recent years had begun to move away from China to escape rising wages, a trend that the Washington-Beijing spat is now accelerating.

New Kinpo Group, which makes everything from computer hardware to facial massagers in Thailand and the Philippines, told Bloomberg this month that Mr Donald Trump's offensive was spurring growing interest in its services. 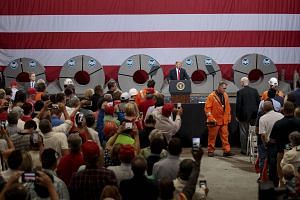 "Taiwanese companies have invested in China in the past because of low labour costs. But as wages in China have been rising, some have begun an exodus to South-east Asia," Mr Tsai Ming-fang, an economist at Taipei's Tamkang University, said.

The numbers are starting to bear that out. Taiwan approved Chinese investments totalling US$4.2 billion in the first six months, down 4.5 per cent, while investments in Vietnam, Malaysia and India surged over the same period.

Much depends on whether Mr Trump makes good on threats to levy tariffs on an additional US$200 billion of Chinese goods - and eventually possibly all imports from the Asian country.

But for many executives, the planning has already begun.

"There are a lot of uncertainties in geopolitics and the China-US trade war has begun," Delta Chairman Yancey Hai told reporters.

The company also addressed the Thai deal. "Delta, with the acquisition, can add more manufacturing bases, reduce risks brought about by the global trade war, bolster its sales network and get closer to its customers," company spokesman Jesse Chou added on Tuesday night.

That sentiment was echoed on Monday by Merry Chief Executive Officer Allen Huang on an earnings conference.

"If Trump's tariffs hit headphones, it will affect exports to the US and our customers will hope that we can cut costs and manufacture in locations unaffected by the tariffs," he told analysts.

"While my competitors all run factories in China, we have an edge over them thanks to our facilities in Thailand. We are preparing to move our semi-finished products from China to Thailand first and finish final assembly there" if tariffs hit.