BEIJING (BLOOMBERG, AFP) - Halfway through his visit to China on Thursday morning, President Donald Trump watched ramrod-straight soldiers swinging their rifles in precision, a ceremony that he tweeted was a "truly memorable and impressive display".

China did everything it could to make Trump feel special, except the two things he actually wanted - offering help to choke the North Korean economy and addressing a yawning trade deficit. The president leaves with no concrete concessions from China on how to confront these two issues.

Even Trump's Secretary of State Rex Tillerson acknowledged that China's steps on the trade deficit are "pretty small" compared to the US$367 billion imbalance between the countries.

Trump had come to China eager to exploit chemistry with President Xi Jinping that he began to cultivate when the Chinese leader visited him at his estate in Mar a Lago, Florida earlier this year. What he got fit a classic Chinese pattern - ceremony over substance, vague promises over visible progress and another Western leader sent packing with warm memories and little else.

"China is much more focused on the optics of the visit," said Paul Haenle, a former China director on the US National Security Council who now heads the Carnegie-Tsinghua Center in Beijing.

"They want to do as much of that as they can and as little on the policy issues as possible." 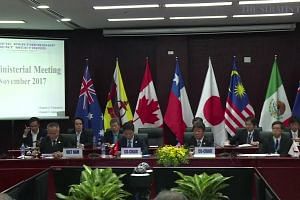 During the campaign, Trump said China personified the way other counties had taken advantage of the US, through the "rape" of US manufacturing and by flouting the rules of trade, at the expense of the American worker.

At rallies, he promised to stick it to China.

On his first state visit, Trump dialled back the language and cooed about his "good chemistry" with Xi.

"My meetings with President Xi Jinping were very productive on both trade and the subject of North Korea, " Trump said in a post on Twitter.

"He is a highly respected and powerful representative of his people. It was great being with him and Madame Peng Liyuan!"

On Friday (Nov 10), Trump heaped more praises on Mr Xi, calling him "a highly respected and powerful representative of his people”.

“My meetings with President Xi Jinping were very productive on both trade and the subject of North Korea,” the US leader, who now heads to Vietnam for an Asia-Pacific summit, wrote on Twitter.

The two countries announced US$253 billion in business deals, involving US industrial giants such as Boeing, Honeywell and General Electric, tech companies like Qualcomm and even Goldman Sachs. But many of the deals are tentative agreements that may not be fulfilled, and they do little to address issues of market access that have long bedeviled American companies trying to break into Chinese markets.

Xi, meanwhile, stuck to carefully calibrated promises to enforce existing United Nations Security Council resolutions on the regime in Pyongyang and to ensure a denuclearised Korean peninsula. In a briefing on Thursday, Tillerson declined to say whether China had made any specific commitments despite repeated pressing from reporters. 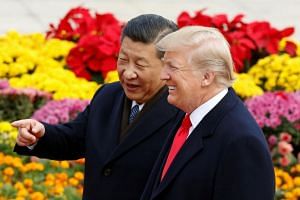 Trump "takes the view that you're a very powerful neighbour of theirs, you account for 90 plus per cent of their economic activity, you're a strong man, you can I'm sure solve for me," Tillerson said of the two presidents' conversations.

"So he was very clear with him and said he believes it can be solved."

So too on trade: Tillerson acknowledged that "there's still a lot more work to do" on fundamental issues of outside investors and companies getting greater access to China's economy and 1.3 billion consumers.

Still, Xi was effusive, calling Trump's trip a "state visit plus" and going out of his way to praise him in public.

Max Baucus, a former US ambassador to China, told Bloomberg Television, "This is classic Chinese. They have been doing this for thousands of years."

"It's their technique to try to suck you in," Baucus said.

"I think all this ceremony here is designed by the Chinese in part to prevent any serious conversation. The more there is pomp and circumstance, the less there is time to talk."

The lack of concrete concessions from China may open Trump to criticism from domestic critics both on the left, who are dubious of his professed skill as a deal-maker who gets results, and from the right, including former adviser Stephen Bannon, who sees China as the primary threat to US economic dominance.

Trump's closest aides insist these stories about him coming home empty-handed miss the larger point. It's all about the relationships, one senior aide insisted - not the deals signed by US companies but relationships formed that will help the countries solve the big problems they face. That's Trump's own brand of personal diplomacy.

The implication is the China-bashing was for campaign-trail consumption but now that it's for real, he has to turn on the charm, and America will come out ahead. Trump even said he didn't fault China for what he called taking advantage of the U.S., instead blaming past US administrations for allowing the trade deficit to balloon.

"After all, who can blame a country for being able to take advantage of another country for the benefit of its citizens? I give China great credit, but in actuality I do blame past administrations for allowing this out-of-control trade deficit to take place," Trump said. "It is just not sustainable."

Overall, the impression from business leaders was they didn't get much. Executives who flew to China only to have officials decline to sign expected deals were frustrated. China had promised some meaty agreements ahead of the trip but backed out at the last minute over bilateral trade and security challenges.

There is a chance that Trump might still have another play at hand when it comes to China. A variety of investigations into Chinese trade practices - alleged steel dumping and intellectual property theft - could result in tough new actions from the U.S.

Commerce Secretary Wilbur Ross declined a chance to deny that the US was planning such actions, saying, "We shall see once we conclude the trip. Investigations occur all the time." In the meantime, China is pressing hard with land reclamation in the South China Sea, a key trade waterway disputed with five other nations in Asia, and building up its Asian Infrastructure Investment Bank to draw regional countries closer into its financial orbit.

"China's got a very coherent regional strategy that they're executing on," said Michael Froman, a former U.S. trade representative.

"They're pulling other countries in the region closer to it and its way of doing things. The question is whether the US will have a regional strategy and execute on it."