WASHINGTON – America’s tariffs on Chinese goods will remain for some time even after both countries seal a deal on trade, said President Donald Trump on Wednesday (March 20) ahead of a fresh round of talks in Beijing next week.

“We’re talking about leaving them and for a substantial period of time, because we have to make sure that if we do the deal with China, that China lives by the deal. Because they’ve had a lot of problems living by certain deals and we have to make sure,” said Mr Trump in brief remarks before departing to Ohio.

His comments come as the United States prepares to send a trade delegation to Beijing this weekend for the next round of negotiations over a trade deal that the President said was “coming along nicely”, despite reports that negotiators had yet to agree on a way of enforcing any trade deal.

A meeting between Mr Trump and Chinese President Xi Jinping – whom he called a friend in his comments – was originally slated for the end of this month but has been pushed back to at least next month or even June, according to reports last week by Bloomberg and the South China Morning Post.

Enforcement has been a key sticking point, with US negotiators wary of the Chinese reneging on promises in the future while Chinese negotiators have insisted on a “fair and objective” process. Bloomberg also reported that Beijing wants the US to lift its current tariffs as part of a deal.

Former acting deputy US trade representative Wendy Cutler told The Straits Times that Mr Trump’s comments would play into the hands of those in China who do not want to make any further concessions to the US.

“The President’s statement earlier today undoubtedly will make it harder to bring the negotiations over the finish line. Rather than talking about the fate of tariffs, now is the time to let the negotiators work out a solution,” said Ms Cutler, who is president of the Asia Society Policy Institute. 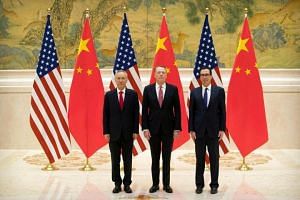 Peterson Institute for International Economics non-resident senior fellow Mary Lovely said that relying on the current tariffs was not a good method of enforcement.

She told The Straits Times: “I don’t think it gives the US much leverage, because the tariffs are already in place and adjustment is already happening to these tariffs. By keeping them on, how is that getting the Chinese to do something different if they already have to pay the cost?”

In his comments, Mr Trump also justified the tariffs on US$200 billion (S$270 billion) worth of Chinese goods, as they net the US government “billions and billions of dollars right now in tariff money”.

But Professor Lovely, who works at Syracuse University, said: “They are getting a lot of tariff revenue, but who is paying that revenue? Recent studies suggest it’s US consumers and businesses paying the higher prices.’’

“It’s a tax on Americans as opposed to coming from reduced profit from Chinese firms,” she added, noting that many exports from China were made by foreign firms operating in China.

“The tariffs are hurting US businesses, raising the cost particularly of technology goods in the US. These are products we use in our own economy,” added Prof Lovely, citing computers and electronic products as examples.

Still, she reckoned Mr Trump’s comments were unlikely to affect next week’s trade talks much. “The Chinese know this is a position held by the US, so this is not news to the Chinese,” she said.