Kim's usual mode of transport is his own aircraft, the Chammae-1, but he appears to have sought help from China due to safety concerns regarding the condition of his jet.

Chammae-1 is a reconstructed Ilyushin Il-62, a Soviet long-range jet airliner. It was discontinued in 1995.

Although the long-range jet can fly up to 10,000 kilometres, easily covering the 4,600-kilometre distance between Pyongyang and Singapore, the age of the jet could have deterred the North Korean leader from using it for his first overseas trip to a place other than China since taking power.

Apple Daily said Kim could have negotiated the loan with Chinese President Xi Jinping during his visit to Dalian, China, in May.

The B-2447 is a 23-year-old aircraft that serves as a normal passenger carrier when not in use by Li. 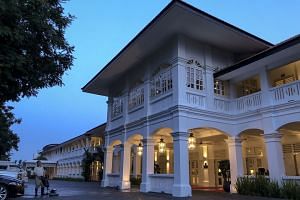 When it is employed as a private jet, the interior of the plane is reupholstered into a private aircraft, complete with an office, reception area and bedroom.

Unlike the US' Air Force One, the B-2447 is not equipped with a defence system against artilleries.

According to South Korea's Yonhap news agency, analysts say it is very uncommon for the North's media to reveal the charter of a foreign airplane for its leader's overseas trips because the North Korean government has long promoted the Juche (self-reliance) ideology and slogans in all state affairs.

They speculate that the disclosure may stem from Kim putting practical interests above loss of face and self-esteem.

Pyongyang may also have revealed the charter of a Chinese airplane to demonstrate its close relationship with China in the face of international sanctions led by the US.

US President Donald Trump and Kim arrived in Singapore on Sunday, ahead of their summit scheduled for Tuesday. Kim arrived at 2.36pm local time, while Trump arrived on Air Force One at 8.22pm.