SHANNON, IRELAND (REUTERS) - United States President Donald Trump on Wednesday (June 5) appeared to cast doubt on news reports of North Korean executions as part of a purge in the aftermath of a failed Hanoi summit and lamented that North Korean leader Kim Jong Un was blamed too quickly.

Asked about South Korean reports that North Korea had executed a top diplomat, Mr Trump said: "I don't know if the reports are correct."

"They like to blame Kim Jong Un immediately," he said during an appearance with Irish Prime Minister Leo Varadkar.

Mr Trump has famously sided with autocratic leaders, including saying last July that he believed Russian President Vladimir Putin over US intelligence findings that Russia had attempted to sway the 2016 presidential election.

In May, he said he agreed with the North Korean leader's criticism of former US vice-president Joe Biden, a Democratic presidential candidate.

There have been conflicting reports about shake-ups in the North Korean diplomatic team. South Korean newspaper Chosun Ilbo said last week that nuclear envoy Kim Hyok Chol was executed in March along with four foreign ministry officials after they were charged with spying for the US. 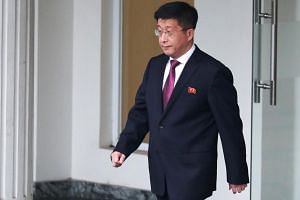 Don't try our patience, North Korea tells US a year after accord signed at Trump-Kim summit in S'pore

North Korea executes envoy in a purge after failed US summit: Media

Previously, some North Korean officials who were reported to have been executed or purged reappeared later with new titles.

CNN reported on Tuesday, however, that Mr Kim Hyok Chol was alive and in state custody.

The South Korean newspaper said earlier that the former top nuclear negotiator, Mr Kim Yong Chol, had been sent to a labor camp. He was then pictured on Monday in a state media photo accompanying Mr Kim Jong Un to an art performance.

"They said he was killed but he wasn't. He was at the theatre the other night. So he wasn't killed. The other four people I know nothing about," Mr Trump said.

The February summit in Vietnam's capital Hanoi, the second between Mr Kim and Mr Trump, failed to reach a deal because of conflicts over US calls for Pyongyang's complete denuclearisation and North Korean demands for sanctions relief.

But Mr Trump struck an upbeat tone. "It's been going pretty well because there hasn't been testing of anything major," he said.