TOKYO (AFP) - Tokyo's city government on Wednesday (June 27) passed strict new anti-smoking rules ahead of the 2020 Olympics, leapfrogging national legislation on lighting up that has been watered down after opposition from pro-smoking MPs.

Japan has long been an outlier in the developed world, considered a smoker's paradise where lighting up is allowed in most restaurants and bars.

The city's new laws ban smoking entirely on school premises from kindergartens to high schools, although a space can be created outside university and hospital buildings for smokers.

Lighting up will be outlawed at restaurants in the capital, regardless of size. Restaurants can set up a separate indoor smoking space but customers cannot eat or drink inside the smoking area.

Smokers who repeatedly flout the new rules as well as offending restaurant owners will face fines of up to 50,000 yen (S$620).

"We are now ready to be the host of mega sporting events like the 2019 Rugby World Cup and the Olympics," said Tokyo Governor Yuriko Koike, who has frequently vowed to clean up the city's act ahead of the Games.

"The Tokyo one is stricter (than the national law) but from the perspective of global standards, I have to add that there are other countries that adopt far stricter rules."

The move came as lawmakers prepare a nationwide version of the smoking ban that has faced criticism for falling far short of measures needed to restrict lighting up indoors.

The new national law will ban smoking at schools and hospitals, but there are loopholes allowing smoking outside the facilities.

Smoking will also be banned inside large restaurants, but unlike the Tokyo city rules, establishments smaller than 100 sq m - about half the restaurant sector - will be exempt.

Big restaurants and newly opened eateries can build a separate smoking space but have to ensure smoke will not escape the area.

The Health Ministry had proposed a strict anti-smoking Bill, aiming to stub out smoking at most indoor establishments. 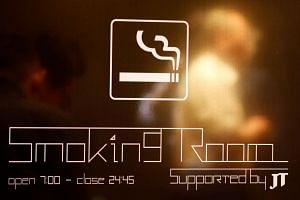 But the plan encountered staunch opposition from members of Prime Minister Shinzo Abe's own Liberal Democratic Party, many of whom openly back the tobacco industry and smokers over health advocates.

Struggling to win support from its own party, the government was forced to water the Bill down several times.

The firm, which includes brands like Winston, Camel and Benson & Hedges, said they welcomed laws protecting against second-hand smoke but opposed "excessive" restrictions.

Ironically, smoking in the street is already banned in many places in Japan, under local regulations that impose hefty fines on violators.

Cigarettes cost only around 440 yen a pack in Japan and carry modest health warning labels.

The World Health Organisation has given Japan its lowest rating for efforts to prevent passive smoking, and it even scores poorly in the region compared with countries like China and South Korea.

Despite that however, tobacco use in Japan has been falling, in line with a broader global trend.