Feb 9, 2017: The Asahi newspaper reports that Moritomo Gakuen bought land from the government for a fraction the price of comparable plots.

March 16, 2017: The government denies that Prime Minister Shinzo Abe made a donation to the operator of the school.

March 23, 2017: The head of Moritomo Gakuen, Mr Yasunori Kagoike, tells parliament that he received a donation of one million yen in cash from Mr Abe via his wife Akie. The government reiterates its denial that this happened.

March 24, 2017: Finance Minister Taro Aso tells reporters that the sale of land to Moritomo was carried out with proper procedures and pricing.

July 31, 2017: Mr Yasunori Kagoike and his wife Junko are arrested for fraud, according to reports. 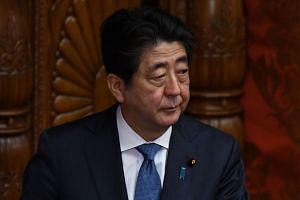 March 2, 2018: The Asahi newspaper reopens debate on the issue, reporting that the Finance Ministry may have altered documents related to the land sale.

March 9, 2018: A Finance Ministry official at the centre of the scandal was found dead in Kobe in western Japan.

March 9, 2018: National Tax Agency chief Nobuhisa Sagawa reported to resign. He oversaw a division in the Finance Ministry involved in negotiating the land sale before moving to head the tax agency.