In its editorial, the paper criticises the second daughter of the Korean Air chairman for being rash in her behaviour with a subordinate and calls on leading business groups to consider keeping such problematic heirs away from the management of the conglomerates.

SEOUL (THE KOREA HERALD/ASIA NEWS NETWORK) - The second daughter of the chairman of Korean Air has scandalised the nation by throwing a tantrum at a less powerful person, just as her elder sister did to her subordinate, three years ago.

Cho Hyun Min, a senior vice president of Korean Air, is said to have yelled in anger and hurled a cup of water at the face of a manager of an advertising agency during a business meeting last month. She is said to have done so because the agency employee failed to answer her questions on the United Kingdom properly during the meeting on a Korean Air ad campaign targeting the country.

As criticism has flared over her bad behaviour despite Korean Air's explanation that she threw a cup on the floor, not at the employee, Cho wrote on her Facebook account on Thursday, "I apologise with my head down for my foolish and reckless behaviour."

Shortly after posting the apology, she went on vacation to Vietnam on Thursday.

However, she added fuel to the fire with a photo taken on an airplane posted to her Instagram account with such hashtags as #Don'tLookForMe, #I'mGoingOnLeave and #OnHappyTripNow.

The genuineness of her apology is questionable.

She returned home early in the morning Sunday and apologised again, but denied she hurled water at the manager's face. Criticism has mounted as other examples of her using abusive language and displaying violent behaviour were revealed following news on the incident.

Angry people wrote posts on the online petition board of the presidential office, calling for stern punishment.

Some demanded Korean Air should be stripped of the word "Korean" in the company name and banned from using the "taegeuk" symbol of Korea in its logo.

Accusations against her were brought to the prosecution, and police have launched a preliminary investigation.

Throwing water at someone's face could amount to assault in Korea. 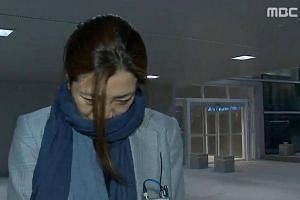 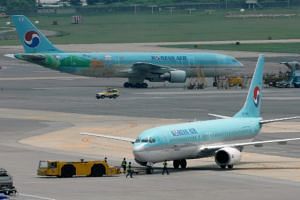 Cho Hyun Min is the younger sister of Cho Hyun Ah, a former vice president of Korean Air, the protagonist in the "nut rage" incident in 2014.

In the incident, the chairman's eldest child became angry with flight attendants for serving her nuts in an unopened packet, rather than on a plate. She ordered the Korean Air plane she had boarded back to its gate when it was taxiing and had the chief cabin crew member deplane.

Cho Hyun Min's elder brother, Cho Won Tae, made headlines in 2005 after assaulting a 77-year-old woman on the street for scolding him over his reckless driving. It is pitiful that all three children of Hanjin Group Chairman Cho Yang Ho have got into such trouble.

Verbal abuse and violence by the children of chaebol leaders are not new.

In September last year, Kim Dong Seon, the third son of Hanwha Group Chairman Kim Seung Youn, evoked public criticism by insulting and assaulting lawyers while drunk at a dinner party he joined as a client.

Trouble-making children of chaebol leaders tend to believe that they are special simply because they were born to super rich parents that control conglomerates, and that they can slight less privileged people. Their behaviour fans anti-chaebol sentiment, though chaebol companies are still seen as desirable workplaces.

Their abusive actions cause not only problems for themselves, but give all business leaders a bad name.

Their impudent acts, which some critics blame on problems in domestic upbringing, could have worse effects as they take control of a wide array of businesses by succession. Even if their personalities and management abilities are below average, they are promoted at a fast pace and eventually take over businesses.

It is no wonder that young people born without silver spoons feel frustration and anger to see them abuse the less privileged.

Every time an episode like this breaks out, the public view of business leaders gets colder. Illegal aberrations by such ill-bred children must be censured and punished sternly as an example to all. Their wayward acts will only fuel discontent and conflicts.

Their audacity is deplorable, considering the future of the companies that will likely come under their control. Unruly chaebol heirs and heiresses may just as well remain only as shareholders and make a clean break from management for the sake of their companies.