TOKYO - The innocuous sakura cherry blossom poses the latest threat to Japanese Prime Minister Shinzo Abe's leadership, just as he is on the cusp of becoming the nation's longest-serving leader on Wednesday (Nov 20).

Domestic media are in overdrive with allegations that the spring garden party - a yearly government shindig dating back to 1952 held for VIPs like members of the diplomatic corps, business leaders and athletes - is being used by Mr Abe as an avenue to reward loyal voters from his constituency in the western Japan prefecture of Yamaguchi.

The event's ballooning budget and swelling guest list have also come under scrutiny, but what may prove to be more damning are questions on whether Mr Abe himself has flouted Japan's strict Public Offices Election Act.

The practice of door-to-door campaigning is banned in Japan over concerns that it may cause undue influence, let alone anything that may remotely bear semblance to a gift.

The distribution of paper fans at a summer event cost a minister her job in 2014, while last month , two rookie ministers were given the axe within the space of a week after a tabloid reported on how their office sent fruits to their voters.

Mr Abe, dubbed the 'Teflon' prime minister for surviving two cronyism scandals, will likely spend his epoch-making week fending off questions in the Diet, as Japan's Parliament is called.

The cherry blossom viewing party at the Shinjuku Gyoen National Garden has been called off next year, with top government spokesman Yoshihide Suga saying this was necessary to "clarify standards for inviting guests and make the selection process transparent".

Amid the scrutiny, the Cabinet Office said it had "discarded" the guest list for this year.

This did nothing to quell the controversy which erupted after documents showed how Mr Abe's office in Yamaguchi prefecture had arranged a package tour for voters to attend the party.

Those who could attend were, subsequently, sent formal invitations from the Cabinet Office under the name of the Prime Minister.

A private dinner party at the lavish Hotel New Otani, attended by Mr Abe, on the eve of the cherry blossom event was also included as part of the tour.

The number of guests was reportedly 850 , and the Mainichi daily said in an editorial that the dinner event, in which Mr Abe "wines and dines voters", had "effectively become the annual function of the Abe support group".

Participants of this dinner party were also charged just 5,000 yen - way below the market rate of 11,000 yen - raising questions of who was making up the shortfall.

"All travel and hotel expenses, including the dinner party, were paid out of pocket by the participants themselves," Mr Abe stressed to reporters on Friday (Nov 15). "There was no money coming in or going out from my office or support group."

On the loyal voters who made the invitation list to the garden party, he said: "There are cases where the executive members of local residents' associations and parent-teacher associations overlap with those who belong to my support group."

But critics did not buy this explanation, saying that it amounted to an official government event "being used for his (Mr Abe's) private purposes". 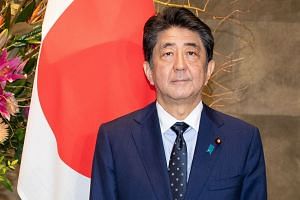 The pro-government Yomiuri Shimbun said in an editorial last week that Mr Abe, who has been in power since December 2012, and his Cabinet "must shape up".

"It is problematic if it became ambiguous for Abe to separate his public and private affairs. He cannot evade being criticised as having lacked moderation," it said.

"The laxity deriving from the long running of his government is likely behind this. Abe should maintain self-discipline in steering his government."