Here are the key steps in the development of the regime's banned nuclear weapons and ballistic missile programmes:

North Korea starts working in the late 1970s on a version of the Soviet Scud-B missile with a range of around 300 kilometres, carrying out a first test in 1984.

The Taepodong-1 is test-fired over Japan in 1998, but the following year, Pyongyang declares a moratorium on such tests as ties with the United States improve.

It ends the moratorium in 2005, blaming the Bush administration's "hostile" policy, and carries out its first nuclear test on Oct 9, 2006.

In May 2009, there is a second underground nuclear test, several times more powerful than the first. Mr Kim Jong Un succeeds his father Kim Jong Il - who dies in December 2011 - and oversees a third nuclear test in 2013. 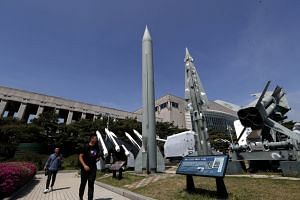 There is a fourth underground nuclear test in January 2016, which Pyongyang claims is a hydrogen bomb.

In March, Mr Kim Jong Un claims the North has successfully miniaturised a thermonuclear warhead, and in April, it test-fires a submarine-launched ballistic missile.

On Aug 3, it fires, for the first time, a ballistic missile directly into Japanese-controlled waters. Later that month, it successfully test-fires another submarine-launched ballistic missile.

There is a fifth nuclear test on Sept 9.

Between February and May, the North tests a series of ballistic missiles that fall into the Sea of Japan.

Pyongyang claims these are exercises to hit US bases in Japan.

A test on May 14 is of a "newly developed mid/long-range strategic ballistic rocket, Hwasong-12", Pyongyang says. It flies 700 kilometres before landing in the Sea of Japan.

Two months later, North Korea announces it successfully tested on July 4 - the US independence day - an ICBM capable of reaching Alaska, a gift for the "American bastards".

There is a second successful ICBM test on July 28.

Hours after US President Donald Trump threatens Pyongyang on August 8 with "fire and fury" over its missile programme, the North says it is considering strikes near US strategic military installations in Guam.

On Sept 3, North Korea conducts its sixth and largest nuclear test. Monitoring groups estimate a yield of 250 kilotonnes, which is 16 times the size of the 15-kilotonne US bomb that destroyed Hiroshima in 1945.

On Sept 15, less than a week after the UN adopts an eighth series of sanctions, North Korea fires an intermediate-range missile over Japan.

On Nov 20, Washington declares North Korea a state sponsor of terrorism, a day before adding to pressure on the isolated state with fresh sanctions.

On Nov 29, North Korea launches a new Hwasong-15 ICBM, which it claims could deliver a "super-large heavy warhead" anywhere on the US mainland.

Analysts agree the rocket is capable of reaching the US, but voice scepticism that Pyongyang has mastered the advanced technology needed to allow the rocket to survive re-entry into the Earth's atmosphere.

In his New Year speech, Mr Kim states that the development of North Korea's nuclear force had been completed.

Catalysed by the Winter Olympics in the South, a rapid diplomatic thaw begins in February.

On April 21, Pyongyang declares that nuclear blasts and ICBM launches will cease immediately and the atomic test site at Punggye-ri will be dismantled to "transparently guarantee" the end of testing.

Mr Kim adds that the possession of nuclear weapons was "the firm guarantee by which our descendants can enjoy the most dignified and happiest life in the world".