TOKYO (BLOOMBERG) - Tencent Holdings will expand its age-verification system to encompass its entire games line-up, an unprecedented undertaking in response to growing criticism it encourages addiction among youths.

The Chinese social media and entertainment titan intends to check all gamers' identities against police databases by 2019, extending a procedure it pioneered for the mobile phenomenon Honour of Kings.

It will kick things off with its 10 of its most popular games before expanding that system to its entire library, the company said in a post on its official WeChat account on Monday (Nov 5). That enormous undertaking - covering scores of titles - should help surface underaged users who are subject to curbs on playing time.

While China's 700 million-plus Internet and social media users are growing accustomed to constant policing of their activities, Tencent's initiative widens the net to include hundreds of millions of children and casual players.

The company has come under fire for fomenting game addiction, particularly via the self-developed Honour of Kings. While it has already put a raft of measures in place - such as limiting play-time for children - the company remains hobbled by regulators who have effectively shut down its once vibrant pipeline of new titles.

In September, Tencent announced it would begin using a police database to verify the ages and identities of those playing Honour of Kings.

In its original post, the company said the move - via what it termed a "health system" - was also intended to address the rampant sale of personal information online. 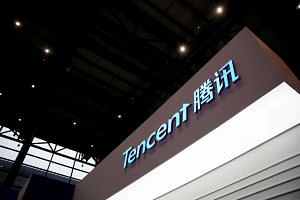 The company's been tightening up on supervision since state media singled out Honour of Kings this year. The mobile slugfest has evolved into a local phenomenon but also become a lightning rod for criticism about the ills of prolonged gaming.

A coterie of government agencies banded together to issue a raft of edicts intended to combat the growing incidence of myopia among children, taking aim at electronic devices and the sheer proliferation of online games. Regulators are now withholding approvals for companies to make money off games, a de facto clampdown that held up monetisation of blockbuster titles such as Fortnite and contributed to Tencent's US$250 billion (S$344 billion) decline in market value since a January peak.

"To safeguard the healthy activity of non-adults, we will make ID verification the standard across our entire line of games," Tencent said in its post.