TAIPEI (REUTERS) - Taiwan President Tsai Ing-wen has named as her running mate for 2020 elections a former premier who angered Beijing so badly last year with his support for the island's formal independence that a major Chinese paper called for his arrest.

Self-ruled and democratic Taiwan is claimed by China as a wayward province and is the Communist Party's most sensitive and important territorial issue. China has threatened to attack if Taiwan moves towards independence.

Mr William Lai, premier until January when he stepped down to take responsibility for a crushing defeat in regional elections last November for the ruling Democratic Progressive Party, will be Ms Tsai's vice-president candidate, she told a news conference in Taipei on Sunday (Nov 17).

In April last year, while still premier, Mr Lai told Parliament he was a "Taiwan independence worker" and that his position was that Taiwan was a sovereign, independent country.

China's nationalistic Global Times tabloid responded by saying China should issue an international arrest warrant for him to face prosecution under the country's 2005 Anti-Secession Law.

Accepting Ms Tsai's nomination, Mr Lai made no mention of independence, but said the island had to stand up to pressure from an encroaching China and "show the way" for Chinese-ruled Hong Kong, which has seen months of anti-government protests.

"In the face of a China which is closing in at every stage and warning signs from Hong Kong, what can the Democratic Progressive Party in next year's critical election battle give the people of Taiwan? Isn't our most important mission to unite and defend Taiwan?" he said.

"I have decided to accept President Tsai's invitation, to be her deputy, to team up to fight the election, and at this darkest time to unite and defend Taiwan, to continue to show the ray of light of democracy, show the way for Hong Kong and illuminate the world."

Taiwan's main opposition party, the China-friendly Kuomintang, said Ms Tsai was seeking to gather "extremist" votes by trying to cosy up to "Taiwan independence forces" with her choice of Mr Lai as running mate. 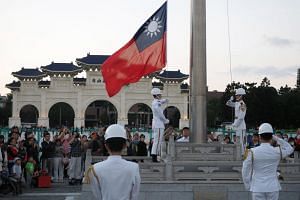 There was no immediate response from China to his nomination, though state media ran stories on it on their social media accounts mostly citing Taiwan media reports and reiterating the Kuomintang's comment.

China has stepped up its pressure on Taiwan ahead of the elections. President Xi Jinping said in January that China reserves the right to use force to bring Taiwan under its control but will strive to achieve peaceful "reunification".

While the Democratic Progressive Party is pro-independence, Ms Tsai has said she wants to maintain the status quo with China, though will defend Taiwan's security and democracy.