Democratic Progressive Party (DPP) chairman Tsai Ing-wen made history on Friday (May 20) as the first woman to become the president of Taiwan.

Here's more about Ms Tsai, who went from law professor to fist-pumping politician within a decade.

1. The bespectacled former law academic was a policy wonk who rose to prominence when she was picked by then president Lee Teng-hui to head a group of legal experts to conduct research proving that Taiwan was not part of the People's Republic of China and to formulate a "two-states" theory.

2. Ms Tsai became the head of the Mainland Affairs Council, the Cabinet-level agency responsible for cross-strait policy, in the DPP administration. She joined the DPP in 2004 and was briefly vice-premier under former president Chen Shui-bian.

3. She cleaned up the image of the DPP in 2008 after it was discredited by the corruption scandals surrounding Mr Chen.

Ms Tsai wrote in her book: "In a mature democratic society, if there is no strong opposition party, then democratic politics will most likely regress.

"I will never be able to forgive myself if I choose not to do what I know I can."

4. The Hakka woman, who is single, is the youngest child of a self-made property developer who started out as a car mechanic.

Her parents had high expectations of all their children, and was disappointed that she did not score first in all her examinations, unlike her older siblings, she told a Taiwan news programme last year.

5. She had wanted to study history and archaeology, but pursued a law degree as her father wanted her to help with the legal matters of his business.

She has law degrees from National Taiwan University, Cornell University and the London School of Economics and Political Science.

6. A respected thinker and negotiator, the publicity-shy Ms Tsai represents a sharp contrast to traditional DPP politicians who have a reputation for aggression and street smarts.

She is not seen as charismatic or a great speaker, but has won over people with her sincerity, intelligence and tenacity.

Having studied in England in the 1980s, Ms Tsai said in a recent interview that she admired the versatility and strength of the "Iron Lady".

She expressed admiration for Dr Merkel's decisiveness, the Guardian reported.

8. The DPP officially supports independence for Taiwan but Ms Tsai has said she wants to preserve the "status quo" with China if she becomes president. 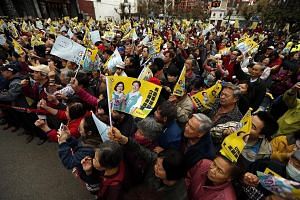 In a policy debate last month, she did not commit to a stance on the "1992 consensus" - a tacit agreement between the KMT and China which says there is "one China" with different interpretations. The DPP has never recognised the agreement.

"I believe cross-strait relations can remain stable... the 1992 consensus is an option, but it's not the only one," she said.

9. This is her second attempt at the presidency. She lost to KMT's Mr Ma Ying-jeou with a respectable 45.6 per cent of the vote in 2012.

10. She has two cats, Think Think and Ah Tsai, who have helped her win votes among young people.